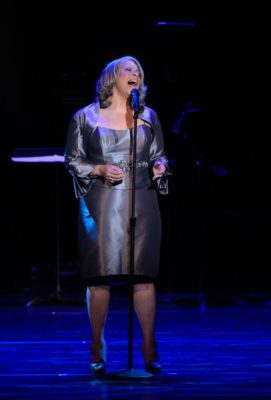 Patti Austin, the prolific singer of R&B, pop, and jazz, gave a rousing and unforgettable performance at Ella @ 100 concert in Washington, DC. (Photo courtesy of the John F. Kennedy Center for the Performing Arts)

The concert was sponsored by the Blues Alley Jazz Society and The Ella Fitzgerald Foundation on the occasion of what would have been the late singer’s 100th birthday, which was celebrated worldwide on April 25, 2017.

Ms. Austin was singing at her peak, in good voice, with excellent songs once recorded and sang live by Ms. Fitzgerald. She was accompanied by the fabulous Count Basie Orchestra, with the two delivering superb arrangements of such classic chestnuts as Too Close For Comfort, A Tisket; A Tasket, Honeysuckle Rose, How High The Moon, and Our Love Is Here To Stay.

In between songs, which were nine in all, Ms. Austin shared with the standing-room only audience hilarious and inspiring stories she encountered during her over 50 years in show business. The majority of the evening was devoted to celebrating the music of the incomparable Ms. Ella Fitzgerald – and Ms. Austin came shining through in splendid fashion.

“Are you all ready to have some fun tonight,” said Ms. Austin following the opening number of her concert on a warm Friday evening. That first song, an up tempo rendition of Too Close For Comfort in which Ms. Austin swung out with the Count Basie Orchestra, set the exuberant tone for a concert that found the singer in high spirits and in superb voice.

A more R&B singer whose music early in her career only on rare occasions came close to bordering on jazz, Ms. Austin surprised and impressed everyone in 2001 when she recorded a brilliant tribute to Ms. Fitzgerald. She has been singing jazz standards regularly ever since.

At Friday night’s concert, Ms. Austin divided her time between singing with Scotty Barnhart and the Count Basie Orchestra and working with a band that included Wayne Bruce (guitar), Vince Evans (piano), Lee Pearson II (drums), and Cheyney Thomas (bass). The show’s most crowd-pleasing moments were those Ms. Fitzgerald staples, like Mr. Paganini (a 1936 song written by Sam Coslow that is strongly associated with Ms. Fitzgerald), I Fall In Love Too Easily (a 1944 song composed by Jule Styne with lyrics by Sammy Cahn. It was introduced by Frank Sinatra in the 1945 film, Anchors Aweigh), and How High 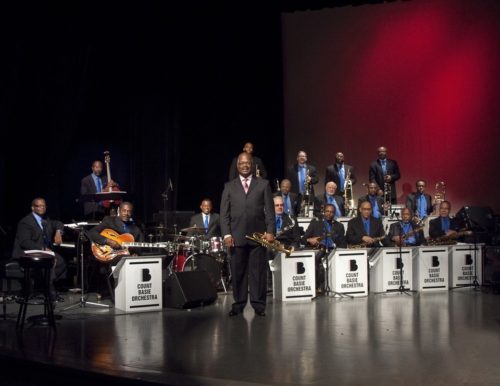 The LEGENDARY Count Basie Orchestra under the direction of Scotty Barnhart.

The Moon (a jazz standard with lyrics by Nancy Hamilton and music by Morgan Lewis. It was first featured in the 1940 Broadway revue Two for the Show, where it was sung by Alfred Drake and Frances Comstock) that featured Ms. Austin’s impressive scat singing. There are some singers who prefer improvisational techniques that are elaborate than Ms. Austin’s, but none have ever found such a perfect balance between a steam engine like pulsing propulsion and an ethereal playfulness. Emphasizing that playfulness were sudden unexpected high notes and vocal punctuation that has become more emphatic for Ms. Austin in recent years. 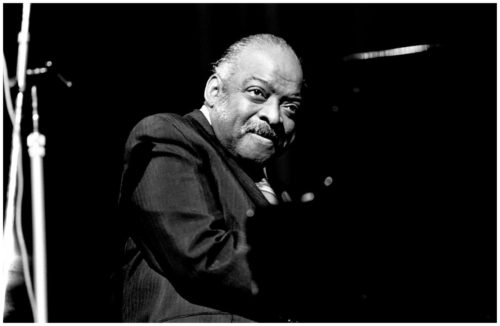 In the show’s more pensive moments Ms. Austin made effective use of a glowing lower register in her rendition of Miss. Otis Regrets and Hard Hearted Hannah (The Vamp of Savannah), a popular 1924 song with words by Jack Yellen, Bob Bigelow, Charles Bates, and music by Milton Ager, were drenched in the emotional quality that has always characterized Ms. Austin’s torch singing, a mood of sweet forgiveness and sassiness.

Time and time again in these and other exemplary performances, Ms. Austin does something so reflexively inventive or poignant, so casually insightful, that you simply listen and stare in awe of this remarkable artist. Elsewhere, the ebullience takes over and you can hardly believe your lucky stars – to live in the world of Ms. Patti Austin’s musical world. It is to laugh out loud and Ms. Ella Fitzgerald would have laugh along with us.