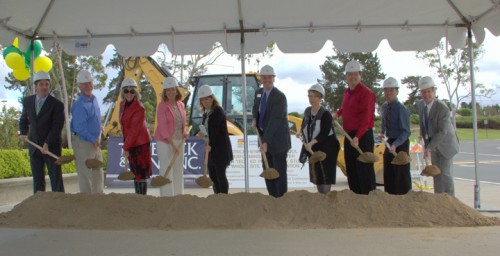 The school is beginning the construction of the long-awaited performing arts center, state-of-the-art facilities for its College, Career and technology (CCTE) Production Studios Program, and campus-wide site modernization improvements.

“I’m thrilled that we have reached this milestone,” said Kevin Beiser, president of the school district’s Board of Education. “This is an exciting time for Henry High School’s students and teachers, as well as the Del Cerro and San Carlos communities.”

“I’ve been a staunch supporter of this new performing arts center,” he added. “The Propositions S and Z funds have wisely been allocated to construct an academically rich center that will support the district’s A-G high school graduation requirements, including “F” for fine arts. The district is also maximizing the Propositions S and Z money by getting matching state Proposition 1D funds for the Production Studios Program facilities.”

Construction of the performing arts center/production studios is expected to be completed by fall 2015, followed by the site modernization in spring 2016.The project partners are T.B. Penick and Sons, Inc. and PJHM Architects.

Earlier this year, the American Institute of Architects awarded PJHM Architects a 2013 Members Choice Award for its innovative design of the new performing arts center and production studios program facilities. The building design currently exceeds qualifications for the California High Performance School Initiative. LED lighting throughout the entire complex, and the use of local and recycled materials will make it both efficient and environmentally friendly. Design influences were drawn from the area, including the use of heavy timbers, open glass and the colors and textures of the surrounding area.