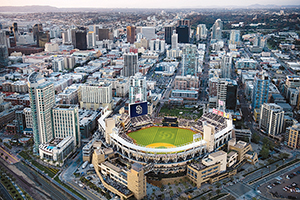 Admission to the event will be free with the Home Plate Gate opening at 4 p.m. Fans will be able to watch the Padres’ prospects take batting practice beginning at 4:30 p.m. with first pitch slated for 6:10 p.m. Prior to the game, Padres season ticket members will also have opportunity to hear from Padres Executive Chairman Ron Fowler, Executive Vice President and General Manager A.J. Preller and Chief Operating Officer Erik Greupner as part of a Member Town Hall with access at the Membership Headquarters.

Padres members will be able to claim up to eight complimentary field level tickets by logging into the “To Do List and Special Offers” tab via their My Tickets account. General admission tickets for the general public will be available for free online at www.padres.com/ondeck and at the Padres Advanced Ticket Windows at Petco Park on the day of the game. Free parking will be available to Padres Members in the Lexus Premier Lot on a first-come, first-served basis when claimed in advance. General fan parking will be available day of for $10 in the Padres Parkade on 10th Avenue at J street and at the Tailgate Lot on Imperial Avenue. Select concessions on the main concourse will be available with specials including $2 hot dogs, $3 bacon wrapped hot dogs and $3 sausages. The Padres 47 Brand Team Store will also be offering 50% off select merchandise during the event. Padres Members will also have exclusive access to a pregame happy hour in the Membership Lounge presented by Herradura.

The Padres On Deck game will serve as the culmination of the Instructional League program that will begin earlier in the month in Peoria, AZ. Following Thursday evening’s game, the entire Padres Instructional League roster will participate in various community initiatives on Friday throughout the greater San Diego region.

Participants in previous Padres On Deck games include current Padres Eric Lauer, Jacob Nix and Luis Urías. Other top prospects to see action in last year’s event included Fernando Tatis Jr., Michel Baez and Adrian Morejon. Full rosters for this year’s Padres On Deck game will be announced at a later date. For more information on the event, visit www.padres.com/ondeck.