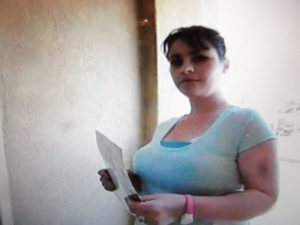 Image of the package thief.

SAN MARCOS–A woman wanted in a connection with a package theft at a San Marcos home is still at large.

On March 31, just before 1 p.m. in the 2500 block of Corbel Way a surveillance video showed a woman knocking at the front door then holding up a piece of paper to cover her face from the camera. She then picks up two UPS packages and walks out of the camera’s view. They contain household items estimated at $100.

Authorities believe someone out there knows the woman, and encourages them to call the San Marcos Sheriff’s Station and ask for Detective Brown at (760) 510-5200.