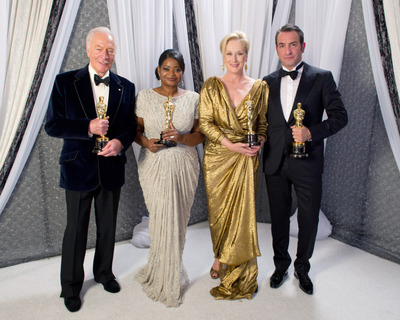 HOLLYWOOD – The 84th Annual Academy Awards could best be described as predictable, from the beginning of Billy Crystal’s movie montage opener to the final award of the night, which went to “The Artist” as everyone knew it would. Still, there were a few surprises. Here’s a rundown of some of the big-category winners and excerpts from their memorable acceptance speeches:

It may be the quirkiest feature in years to find favor with the showbiz establishment here — black-and-white, French, and did we mention it’s a silent movie? But the charming tribute to Hollywood’s early days had scooped up so many other awards this year it was considered a lock for the Oscar.

“I am the happiest director in the world right now. Thank you for that,” Hazanavicius said in his acceptance speech. He also thanked Uggie, the dog who starred in his film.

Meryl Streep knew what you were thinking Sunday when they called her name at the Academy Awards:

“ ‘Awwww, come on, her again?!?’ ” she joked, accepting a historic third career Oscar for her portrayal of Margaret Thatcher in “The Iron Lady.” (Only three other actors, Jack Nicholson and the late Walter Brennan and Ingrid Bergman, have won three Oscars; only one, the late Katharine Hepburn, has won four.) It was a classic Streepian moment — wittily self-deprecating and self-aware — and, for all her long track record of vacuuming up awards, one of the bigger surprises of a mostly unsurprising night.

One of the less-surprising winners: Dujardin, whose widely praised performance in “The Artist” was a shoo-in for the award. “Clearly excited, Dujardin finished his speech with an ecstatic — and difficult to understand — statement: ‘If George Valentin could speak, he’d say, ‘Merci beaucoup, formidable!’ ” reports Sarah Anne Hughes.

Spencer has been scooping up awards for her turn in “The Help” all year, so this came as no surprise. Still, the actress — only the fifth African American in history to win a Supporting Actress Oscar — seemed genuinely taken aback:

The clearly emotional actress was met with a standing ovation from the audience. Spencer first thanked the Academy for having Christian Bale — “the hottest guy in the room” — introduces her.

She also thanked her family in Alabama and in L.A., as well as Tate Taylor, her friend and the film’s director, and “Help” author Kathryn Stockett.

Choking back tears, Spencer was cut off before she was able to finish her speech: “I’m wrapping up. I’m sorry. I am freaking out. Thank you, world.”

“If it’s become an Oscar-night cliché to reward previously overlooked seniors, and yet another Oscar-night cliché to honor straight actors who play gay — oh, and don’t even get us started on the vote-clinching power of a great death scene — Plummer’s trifecta-style win nonetheless felt fresh,” wrote The Washington Post.

Plummer is the oldest actor in history to win an Oscar, reports Celebritology.

For weeks the filmmaker and competing Israeli director Joseph Cedar stressed that their pieces were about family and humanitarian issues, not politics. However, the speech had political undertones.

One of the surprises of the night, “Undefeated” tells the story of a high school football team. When it won, co-director TJ Martin was so surprised that he said the f-word at the podium. The five-second delay meant it was bleeped out for TV viewers, Celebritology reports:

“First and foremost I’d like to apologize for that,” said TJ Martin, the man responsible for the accidental curse word. (The specific phrase used: “[bleeping] amazing.”)

“That was not the classiest thing in the world,” he added. “However, it did come from the heart.”

Rash is enjoying some Internet fame after the Oscars for the way that he mocked presenter Angelina Jolie’s bold pose when presenting the award to the three co-writers. Jolie presented the award with her hand on her hip and her right leg extended, and Rash couldn’t help but pay tribute to it. He told the Celebritology blog’s Jen Chaney:

“It was just an impulse. . . . I was just standing there and I thought — ” At this point, he paused to, once again, stick his leg out.

“I hope it was okay,” Rash, a.k.a. Dean Pelton from TV’s Community and former member of the Groundlings improv troupe, said. “I hope she thought it was okay. It was a loving tribute.”

It’s unclear whether Jolie thought it was loving or not. But was it funny to many of the people watching the Oscars at home? That’s a definite yes.

BEST ORIGINAL SONG: Man or Muppet from The Muppets, by Bret McKenzie

It was no surprise that McKenzie would win for his clever meditation on Muppet-hood, but critic Anne Hornaday was disappointed that audiences were robbed of the chance to hear his song. Celebritology reports that on the red carpet, McKenzie hinted that he might smuggle a Muppet in to sing a few bars if he won, but alas — he opted to crack some Kermit jokes instead.