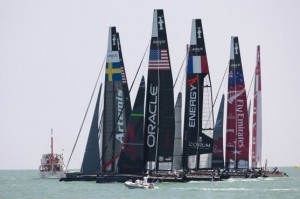 RHODE ISLAND–The inaugural champion of the AC World Series will be decided in Newport, Rhode Island on July 1, the final day of racing in the series. Under the spotlight of a nationwide audience on NBC, the grand finale will see one of eight teams win the title.

Oracle Team USA’s Jimmy Spithill holds pole position for the Championship by four points from Dean Barker’s Emirates Team New Zealand. Artemis Racing is in third place and looking to improve but skipper Terry Hutchinson will be mindful of Frenchman Loïck Peyron’s Energy Team, who are making a late push for the podium, just six points back in fourth, but coming off a win in Venice.

“Newport will be a fantastic event, and it will be great to see the America’s Cup back in town,” Spithill says. “We’re going there to try and wrap up the season. That’s been our goal and it’s obviously something we’d like to win.”

The format for the four days of championship racing in Newport (June 28 to July 1) has been released by Regatta Director Iain Murray and the pressure will come on in the final day of racing, when both the Match Racing and Fleet Racing titles for Newport will be decided in one race showdowns.
Five fleet races will be scored in Newport with the final contest on Sunday weighted more heavily; a good result there is critical for a high finishing position. In match racing, the teams will be seeded into a quarter-final elimination round (best of three) on Thursday with the winners advancing to a one race knock-out round in the semi finals on Saturday before the winner takes all final on Sunday.

Artemis Racing has won the last two match racing series in Naples and Venice. A good result in Newport could see the team move up into second place for the season.

“I’ve spent a fair bit of time in Newport, Thursday night racing in the J24 fleet,” Hutchinson said. “It will be different in the AC45, but Newport offers a great race course with lots of underwater obstacles. It is also shifty and puffy, with plenty of current, a lot like Plymouth.”

The AC500 Speed Trial, which doesn’t score points for the season championship, is scheduled for Saturday afternoon. This has become a crowd favorite at the AC World Series, especially on windier days, with the teams flying down a 500-meter track in pursuit of the fastest run.

China Team has informed event organizers that they will not compete in Newport but intend to develop young Chinese sailors through the Red Bull Youth America’s Cup as a bridge to a future all-Chinese America’s Cup sailing team.