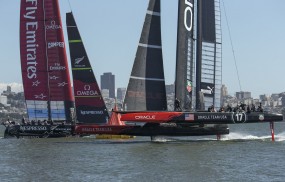 SAN FRANCISCO–Oracle Team USA has scrapped its way back into contention at the 34th America’s Cup with a pair of victories today over Emirates Team New Zealand.

The defender won Race 14 by 23 seconds and Race 15 by 37 seconds in two wire-to-wire victories. Oracle Team USA trails Emirates Team New Zealand 8-5 on the scoreboard and 8-7 in victories (the team’s first two victories weren’t counted due to a penalty imposed by the International Jury), but has won four straight since Emirates Team New Zealand got to match point on Wednesday.

“All in all, a fantastic job by the team,” said Oracle Team USA skipper Jimmy Spithill. “We got off the line well in both races, Ben (Ainslie, tactician) and Tom (Slingsby, strategist) made some high-pressure decisions, and in terms of physicality it was one of the toughest days out there given how up and down the wind range was. The boys on the handles (the grinders) dug in and were rewarded.”

Oracle Team USA came off the start line to leeward of Emirates Team New Zealand in both races and controlled the match approaching the first turning mark. Each time Spithill luffed counterpart Dean Barker to gain the slight bit of distance needed to lead onto the ensuing run. The Kiwis made strong efforts on the upwind and second downwind legs to close the gaps, but could never get past the defender.

“Yes, we’re fast enough to win this,” said Barker. “With that we have to sail well. We let ourselves down today on both first downwinds. It was hard where we started in both races. We were behind at Mark 1 both times and gave up too much distance on the downwinds. The boys worked hard and made gains upwind, but it was never quite enough to put pressure on Oracle Team USA.”

Oracle Team USA’s Ainslie also spoke of the difficulty on the racecourse, with the wind puffy and patchy. But when the wind strength increased in the second race, the crew unleashed Oracle Team USA and it began foiling upwind – a mode where the boat looks its best.

“Foiling upwind is a decision between me, Tom and Jimmy a bit, and it’s got to do with wind pressure,” said Ainslie. “If we see that we have good pressure and a good shift we’re happy to go in that mode. Today a bit in the second race we had good pressure and were happy to go fast the way we were going. It’s important to do it at the right time. If you do it at the wrong time on the outside of a shift or a header you can lose as much as you’d possibly gain.”

Tomorrow marks Day 17 of the 34th America’s Cup, which will put the match in the history books as the longest ever. Lighter conditions are forecast, yet still strong enough to conduct racing. But if today was patchy, tomorrow could be worse, adding pressure to both teams who have no margin for error.

“It’s right there for the taking, we just have to put a solid race together,” said Barker. “We didn’t do as good a job as what we expected today. We’re not down, we know we can win this thing, we just have to go out tomorrow and do a much better job.”

“This is a team that has been through a lot in this campaign,” said Spithill. “We’ve faced all sorts of adversity. We capsized Boat 1, everything going on before match, taking away 2 points and our wing trimmer, but the team didn’t wave the white flag. Now the boat is so much quicker that we believe we can win this. And we’ve got a wave of momentum behind us that’s getting bigger every day.”

Races 16 and 17 are slated for tomorrow, scheduled to start at 1:15 and 2:15 p.m. PT. In the U.S., the America’s Cup Finals will be broadcast live on the NBC Sports Network. Replays will be available on the America’s Cup YouTube channel.

Internationally, the America’s Cup Final can be viewed in more than 170 territories. All racing is also live on America’s Cup YouTube channel (subject to territorial restrictions).