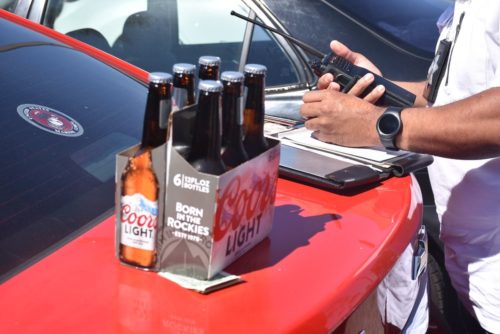 Deputies and agents with the California Department of Alcoholic and Beverage Control (ABC) conducted the sweep from 11 a.m. to 3 p.m. in the San Marcos area.

“Shoulder Tap” is shorthand for teenagers hanging out in front of liquor or convenience stores and asking patrons entering the business to buy alcohol for them.

During the pitch, the decoy indicates that he or she is a minor and cannot purchase alcohol.  Undercover deputies and ABC agents wait nearby, ready to arrest people who buy or sell alcohol for the teens.

The decoys visited eight stores and made 37 contacts in San Marcos. The operation resulted in three citations for furnishing alcohol to a minor.

Buying or providing alcohol to someone under 21 is against the law in California.  If you are convicted, you could face up to six months in jail, a minimum fine of $1,000 and 24 hours of community service.

According to the most recent ABC statistics, 31 teenage drivers (between 16 and 19) were killed in DUI crashes statewide in 2015.  In 2014, 1,688 teenagers were seriously injured in alcohol-related crashes in California.

The Centers for Disease Control and Prevention (CDC) reports more than 4,300 people under the age of 21 die every year in alcohol-related incidents nationwide.

The goal of the Shoulder Tap operation is to reduce the availability of alcohol to minors.  This operation was part of a $100,000 grant from ABC. The money will be used to fight alcohol-related crimes and educate ABC-licensed businesses to make communities safer.