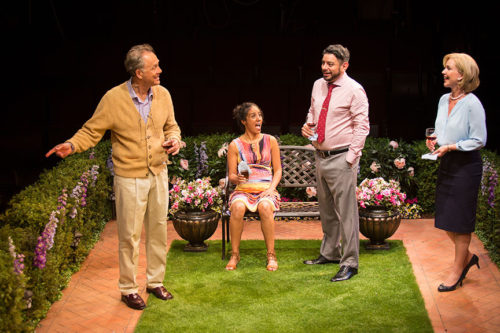 Developed in the 2017 Powers New Voices Festival, it runs through June 24 in the Sheryl and Harvey White Theatre, part of the Conrad Prebys Theatre Center, and then hits the road!

Young power couple Pablo and Tania get their piece of the American dream when they purchase an upscale house in a historic neighborhood. But a disagreement with their next-door neighbors Virginia and Frank over the property line that separates their backyards soon spirals into an all-out war of taste, class, and gardening. The hedgerow becomes the site of a culture clash and friendly neighbors turn into flower-flinging enemies in this West Coast premiere.

The Globe for All touring program, the Globe’s cornerstone arts engagement initiative, was launched in 2014 by Erna Finci Viterbi Artistic Director Barry Edelstein and has since brought free professional theatre twice a year to over 7,300 diverse, multigenerational people in communities throughout San Diego, offering workshops, community meals, and talkbacks.

The Native Gardens Globe for All Tour performances will take place at Hilltop Middle School/South Bay Community Center on Thursday, June 28; at Lemon Grove Academy/Lemon Grove Branch Library/Lemon Grove Historical Society on Friday, June 29; at the Otay Mesa-Nestor Branch Library on Saturday, June 30; and at the Oceanside Public Library in their Civic Center Community Rooms on Sunday, July 1. Tour performances are by invitation only from the community