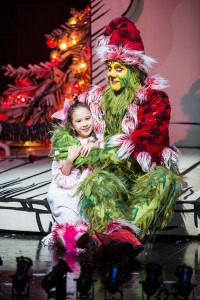 Gabriella Dimmick as Cindy-Lou Who and Steve Blanchard as The Grinch in the 2013 production of Dr. Seuss’ How the Grinch Stole Christmas! at The Old Globe. The annual holiday musical will run through Dec. 28. Photo by Jim Cox.

The Grinch is directed by James Vásquez with book and lyrics by Timothy Mason and music by Mel Marvin. The original production of Dr. Seuss’How the Grinch Stole Christmas! was conceived and directed by Jack O’Brien with Additional Lyrics by Theodor S. Geisel, Additional Music by Albert Hague and original choreography by John DeLuca.

Dr. Seuss’ How the Grinch Stole Christmas! is a wonderful, whimsical musical based upon the classic Dr. Seuss book. Back for its 16th incredible year, the family favorite features the songs “Santa for a Day,” “You’re a Mean One, Mr. Grinch” and “Welcome, Christmas (Fah Who Doraze),” the delightful carol from the popular animated version ofHow the Grinch Stole Christmas! Celebrate the holidays as the Old Globe Theatre is once again transformed into the snow-covered Whoville, right down to the last can of Who-hash.

Steve Blanchard returns to his role as The Grinch for his third consecutive season. Blanchard has appeared on Broadway in Beauty and the Beast, Camelot, The Three Musketeers and A Christmas Carol and was seen in the Off Broadway productions of Orphan Train, Johnny Guitar, Frankenstein, Treasure Island, Moby Dick and An Oak Tree.

Alternating in the role of Cindy-Lou Who and making their Globe debuts are Taylor Coleman of Carmel Valley andGabriella Dimmick of La Mesa. Coleman has trained with San Diego’s Royal Dance Academy, performing numerous times at Mandeville Auditorium, and recently appeared in a production of Rainbow Fish. Dimmick was most recently seen in San Diego Musical Theatre’s production of The Sound of Music at Birch North Park Theatre and has performed for several years with The California Ballet Company.

Three-time San Diego Critics Circle Award winner Steve Gunderson returns as Old Max and marks his 11th appearance in The Grinch at the Globe. His Off Broadway credits include Suds: The Rocking ‘60s Musical Soap Opera,Forever Plaid, Back to Bacharach and David, Butley and Street Scene. Playing Young Max is Jeffrey Schecter, who previously appeared at the Globe in the world premiere musical Robin and the 7 Hoods. His extensive Broadway credits include Nice Work If You Can Get It, Anything Goes, A Chorus Line and The Pajama Game among others.

The Old Globe will once again offer an autism-friendly performance of Dr. Seuss’ How the Grinch Stole Christmas! on Saturday, Dec. 14 at 10:30 a.m. Following a very successful inaugural performance last year, The Grinch will be performed in a friendly and supportive environment for children on the autism spectrum and their families. Slight adjustments will be made to the production including fewer loud noises and flashing lights that may be challenging for some audience members. Additional features will also help make the experience safer and more enjoyable for children with autism and other sensitivity issues, including a pre-show visit to the Globe to familiarize children with the theatre; an online social story available to view and print at home that will outline in words and pictures the experience of a visit to the Globe; a quiet area in the lobby of the theatre; and on-site volunteers to assist families as needed. Theatre Development Fund’s (TDF) Autism Theatre Initiative serves as an advisor for The Old Globe’s autism-friendly Grinch performance (www.tdf.org/autism).

Dr. Seuss’ How the Grinch Stole Christmas! is supported in part through gifts from Production Sponsors Audrey Geisel, Bank of America, Random House Children’s Books and SDG&E. Globe Literacy and Education Initiatives, including the autism-friendly performance of The Grinch, are supported in part by Elaine and Dave Darwin and Dan and Phyllis Epstein.

Steve Blanchard reprises his role as The Grinch from the 2011 and 2012 productions of Dr. Seuss’ How the Grinch Stole Christmas! Blanchard has appeared on Broadway in Beauty and the Beast, Camelot, The Three Musketeers and A Christmas Carol. His National Tours include Little House on the Prairie, Camelot, The Phantom of the Opera, A Funny Thing Happened on the Way to the Forum and Hans Christian Andersen. His Off Broadway credits include Orphan Train,Johnny Guitar, Frankenstein, Treasure Island, Moby Dick and An Oak Tree. He has appeared regionally in Little House on the Prairie (Guthrie Theater), Tarzan (Lyric Theatre of Oklahoma) and Esmeralda (The Repertory Theatre of St. Louis). His extensive television and film credits include “Law & Order,” “Third Watch,” “Cupid,” “Ed,” Those Who Wander, Dark Vengeance, Savva and Rap Master Ronnie: A Report Card for HBO. He can be heard on the original recordings of Johnny Guitar, Sundown, Frankenstein and Northbound Train.

James Vásquez has recreated the original musical staging of Dr. Seuss’ How the Grinch Stole Christmas! since 2003. At the Globe, he directed Richard O’Brien’s The Rocky Horror Show, served as Associate Director of Jane Austen’s Emma – A Musical Romantic Comedy and provided musical staging for Boeing-Boeing and last summer’s Shakespeare Festival production of A Midsummer Night’s Dream. He received San Diego Theatre Critics Circle Award nominations for Outstanding Direction of a Musical for the world premiere of Harmony, Kansas and the West Coast premiere of[title of show] (Diversionary Theatre) and won the award in 2010 for Sweeney Todd (Cygnet Theatre Company). His other recent directing/choreography credits include the workshop of Harmony, Kansas (Goodspeed Musicals), Marry Me a Little, Birds of a Feather, Pippin and Next Fall (Diversionary), Hedwig and the Angry Inch and Little Shop of Horrors (Cygnet) and Into the Woods (New Village Arts). In 2004, Vásquez founded Daisy 3 Pictures with Mark Holmes and Carrie Preston. Their first two feature films, 29th and Gay (TLA Releasing, Here TV) and Ready? OK!(Wolfe Video, LOGO), have played national and international film festivals, with Ready? OK! winning Best Feature Film awards in Seattle, North Carolina and San Diego. Their latest feature film, That’s What She Said, starring Anne Heche, made its world premiere at the 2012 Sundance Film Festival.

Tickets to Dr. Seuss’ How the Grinch Stole Christmas! can be purchased online at www.TheOldGlobe.org, by phone at (619) 23-GLOBE or by visiting the Box Office at 1363 Old Globe Way in Balboa Park. Performances begin on Nov. 16 and continue through Dec. 28. Ticket prices start at $37 for adults and $24 for children (17 years and under).