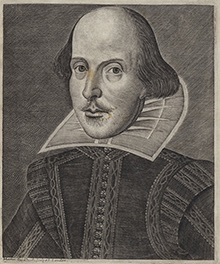 SAN DIEGO–The Old Globe, in partnership with the San Diego Public Library, has been selected as the host site for the state of California for First Folio! The Book that Gave Us Shakespeare, a national traveling exhibition of the Shakespeare First Folio, one of the world’s most treasured books.

The Folger Shakespeare Library, in partnership with Cincinnati Museum Center and the American Library Association, is touring a First Folio of Shakespeare in 2016 to all 50 states, Washington, DC, and Puerto Rico.

“The Old Globe is bursting with pride that the only California stop on the national tour of First Folio! The Book that Gave Us Shakespeare will be in San Diego,” said Globe Artistic Director Barry Edelstein. “This volume is one of the most important ever published, and the plays printed in it—the plays that are the lifeblood of The Old Globe—are cornerstones of our language, our worldview, and our very humanity. That we will be able to give San Diegans—and all Californians—a chance to view firsthand the pages on which those plays first appeared is an excitement and an honor.” Edelstein continued, “Together with the San Diego Public Library, we brought together a coalition of great institutions that demonstrates just how rich and deep are the arts and culture in San Diego.”

“The San Diego Public Library is thrilled to be partnering with The Old Globe, one of the most esteemed regional theaters in the nation, and other institutions to bring First Folio! The Book that Gave Us Shakespeare to San Diego,” said San Diego Public Library Director Misty Jones. “This partnership is the true meaning of collaboration. By leveraging our resources and working with each other, we not only will be providing access to view one of the most important documents ever published but also sharing the spirit of Shakespeare with all San Diegans and Californians.”

The First Folio is the first collected edition of Shakespeare’s plays. It was published in 1623, seven years after Shakespeare’s death. It contains 36 plays, half of which had not been published during Shakespeare’s lifetime and would have been lost if not for the First Folio. Two of Shakespeare’s fellow actors compiled the volume, hoping to preserve their friend’s work for future generations. They gave us definitive versions of the entire Shakespeare canon, and they saved such masterworks as Macbeth, Julius Caesar, Twelfth Night, The Tempest, Antony and Cleopatra, The Comedy of Errors, and As You Like It from oblivion by publishing them for the first time in the First Folio.

“The First Folio is the book that gave us Shakespeare. Between its covers we discover his most famous characters—Hamlet, Desdemona, Cordelia, Macbeth, Romeo, Juliet, and hundreds of others—speaking words that continue to move and inspire us,” said Michael Witmore, Director of the Folger Shakespeare Library. “Shakespeare tells the human story like no one else. He connects us to each other, to our history, and to themes and ideas that touch us every day. We are delighted that we can share this precious resource with people everywhere, from San Diego, California to Gurabo, Puerto Rico, from Eugene, Oregon to Duluth, Minnesota.”

The Folger Shakespeare Library holds 82 copies of the First Folio, by far the largest collection in the world and more than a third of the 233 known copies in the world today. It is believed that 750 copies were originally printed.

When the First Folio arrives in San Diego, California, its pages will be opened to the most quoted line from Shakespeare and one of the most quoted lines in the world, “To be or not to be,” from Hamlet. Accompanying the rare book will be a multi-panel exhibition exploring the significance of Shakespeare, then and now, with additional digital content and interactive activities.

The exhibition will be presented to San Diego by The Old Globe and the volume will be hosted here at The Central Library at Joan Λ Irwin Jacobs Common. Prior to, during, and after the exhibition, The Old Globe, the San Diego Public Library, and their many project partners will offer numerous public programs for adults and families.

First Folio! The Book that Gave Us Shakespeare will enrich the cultural life of San Diego, with an emphasis on reaching underserved communities, by cultivating appreciation for the richness of thought about Shakespeare in our city; demonstrating the impact and influence Shakespeare has had on our region and American culture at large; and providing meaningful and memorable encounters with Shakespeare’s plays in order to enhance understanding of the First Folio’s history and relevance as an iconic cultural object.

Final touring dates for First Folio! The Book that Gave Us Shakespeare will be announced in April 2015.

First Folio! The Book that Gave Us Shakespeare has been made possible in part by a major grant from the National Endowment for the Humanities: Exploring the human endeavor, and by the generous support of Vinton and Sigrid Cerf and the Google Inc. Charitable Giving Fund of Tides Foundation. Sponsorship opportunities of this major exhibition and the Folger’s other Wonder of Will programs commemorating the 400th anniversary of Shakespeare’s death are available; learn more at www.folger.edu.