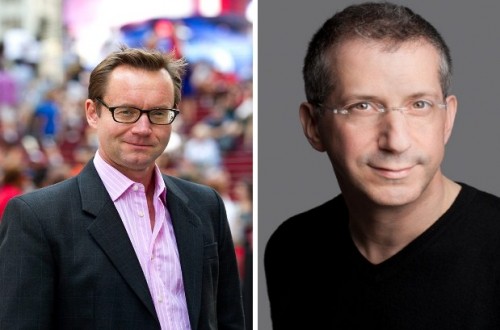 Broadway wouldn’t be Broadway without Michael Riedel, whose years as the New York Post’s theatre columnist and “Theater Talk” co-host have shown him to have unparalleled wit, powers of observation, and even influence. This sure-to-be-intriguing chat between Old Globe Artistic Director Barry Edelstein and Riedel will explore the current state of Broadway and the American theatre, and a few inside stories from Riedel’s new book, Razzle Dazzle: The Battle for Broadway. It takes readers through the fascinating history of a transformative moment in the history of Broadway and New York City, when as much drama happened offstage as on, and the industry’s stars, producers, and mega-hits changed the very nature of the American stage. After the presentation, Riedel will also sign copies of the book, which will be available for purchase at the event.

Barry Edelstein In Conversation with Michael Riedel begins at at 6 p.m. in Hattox Hall, part of the Karen and Donald Cohn Education Center in the Globe’s Conrad Prebys Theatre Center. This special presentation is free to the public, though reservations are recommended to guarantee a seat. Reservations can be made by phone at (619) 23-GLOBE or by visiting the Box Office at 1363 Old Globe Way in Balboa Park.