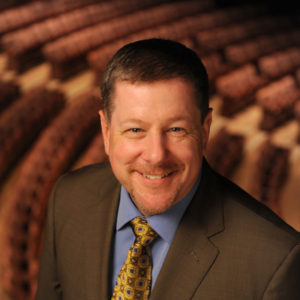 SAN DIEGO–The Board of Directors of The Old Globe announced the departure of Managing Director Michael G. Murphy, who has accepted an appointment as the President and CEO of Shea’s Performing Arts Center in Buffalo, New York.

Murphy will replace Anthony Conte, who retiring after 15 years at the helm. Murphy will leave the Globe on September 26, and take over his new leadership role in the first week of October.

Vicki L. Zeiger, Chair of the Globe’s Board of Directors, commented, “The Board is sorry to see the very talented Michael go, but at the same time we are so proud and happy about the tremendous career opportunity he is embarking upon as President and CEO of Shea’s Performing Arts Center. Michael has done extraordinary work over the thirteen years he has been with the theatre helping to take it to the level it is today. His relationships with the Board, supporters, artists, staff and patrons of the Globe have been productive and immensely rewarding, and he has set a high standard in representing the unique needs of the theatre in our beautiful and historic Balboa Park setting.” Zeiger added “The Executive Committee of the Board met immediately to develop a plan to find his replacement, and Senior Management is developing a transition plan until that replacement can be named.”

“I will miss San Diego and The Old Globe, especially the dedicated and creative staff who dare to tackle any challenge, raising the bar time after time,” said Managing Director Michael G. Murphy. “Talented and hard-working production, artistic, and administrative teams are at the core of creating powerful and transformative theatre and, thanks to them, the Globe is unparalleled in its achievements. In the thirteen years I’ve been here I’ve watched the Globe continue to grow in its national prominence and deepen its service to San Diego and I’m so proud to have made a contribution to that growth. I’m grateful to the artists, board members, donors, staff, and audiences who each play an important part making the Globe the flagship arts organization of San Diego. Under the artistic leadership of Barry Edelstein, which builds upon the Globe’s historic legacy and broadens its impact, the theatre will have a bright and flourishing future.”

“Michael Murphy’s departure from The Old Globe is bittersweet. We’re thrilled by this exciting new opportunity for him and wish him well, and yet we will miss him dearly,” said Erna Finci Viterbi Artistic Director Barry Edelstein. “Shea’s Performing Arts Center is a wonderful institution poised for real growth, and Buffalo is Michael’s home. Both aspects of this move are exciting for him. At The Old Globe he will leave a legacy that will endure for generations, and that’s exciting for us. His thirteen years here have brought institutional growth and stability, and his leadership has been wise and warm. Everyone in the institution will miss his sense of humor and gentleness, and on a personal level I will miss our daily interactions and friendship. The Globe’s Board is launching a national search for Michael’s successor, and while his shoes will be very difficult to fill, the great work he’s done here will help us attract a superstar. This theater and the wider San Diego arts community will draw inspiration from everything that Michael has achieved and taught us, and we’ll be watching him go from success to success even as we continue our own great work. With tremendous optimism, I look forward to what’s next for us and also for him.”

Shea’s is the leading Performing Arts Center in the Greater Buffalo/Niagara region, with over 250 performances and events per season in their three spaces—the lovingly restored 1925 Buffalo Theatre, which serves as a Broadway touring house, the 250 seat Smith Theatre, and the recently acquired 710 Main Street Theatre (formerly Studio Arena Theatre), where the company is expanding programming in conjunction with other local theatre companies, and hosting Canada’s renowned Shaw Festival. With an annual budget of $18.5 million, Shea’s reaches over 250,000 patrons annually and presents the widest variety of performing arts in the region including touring Broadway musicals, concert artists, family shows, comedy, education programming, local school presentations, historic tours, special events and a free family film series. This marks a return home for Mr. Murphy, a Western New York native and proud graduate of Gowanda Central High School, Class of 1979.

Murphy served as Managing Director of The Old Globe from 2012 to the present, and as General Manager from 2003 to 2012, overseeing the Production, Education, Human Resources, Information Technology, and Facilities Departments, as well as Front of House operations. He also managed the construction of the Globe’s new theatre and education facilities. Prior to the Globe, he was the Managing Director of Austin Lyric Opera in Austin, Texas; Director of Administration of San Diego Opera; and General Manager of San Diego Repertory Theatre. He also held similar positions in New York City at Theatre for a New Audience and the Joyce Theater Foundation’s American Theater Exchange, and served as negotiating assistant for the League of Resident Theatres and sales representative for Columbia Artists Theatricals Corporation. Mr. Murphy serves on the Executive Committees of the National Alliance of Musical Theatre, League of Resident Theatres, and the Balboa Park Cultural Partnership, and on the Boards of the National Corporate Theatre Fund and San Diego County Theatrical Trusts. Mr. Murphy has a B.F.A. degree in Stage Management from Webster University in St. Louis, Missouri, and an M.F.A. in Performing Arts Management from Brooklyn College.

Among his many accomplishments during his tenure at the Globe are the sensory-friendly annual performances he pioneered for Dr. Seuss’ How the Grinch Stole Christmas! (currently in their fourth year and immensely popular as a new family tradition). These performances, presented in a family-friendly and supportive environment for children and adults on the autism spectrum and their families, along with a number of other special-needs families, allow these sometimes isolated families to experience art and entertainment together in a safe and fun way, an experience that isn’t always easy to come by.

Murphy oversaw the construction of the Conrad Prebys Theatre Center, completed in 2009, when the Globe unveiled its redesigned campus with the opening of the Center, featuring the new Sheryl and Harvey White Theatre, Karen and Donald Cohn Education Center, and Hattox Hall. The White Theatre replaced the Cassius Carter Centre Stage and was inaugurated with a production of the musical I Do! I Do!