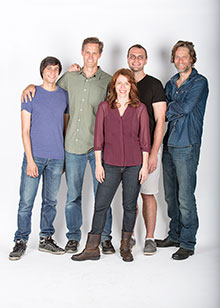 In The Few, QZ keeps her small newspaper going in her northern Idaho town by running personal ads from lovelorn truckers.  When Bryan, her publisher and former lover, returns, the two must revisit the past and reconsider the roads their own long-haul journey has travelled.  A funny and bighearted play about our longing for connection and the barriers we place in our way.

“One of the Globe’s most important jobs is to introduce entertaining and significant new American plays to San Diego and beyond,” said Artistic Director Barry Edelstein.  “The Few is both of those things.  Samuel D. Hunter’s writing is inventive and beguiling and takes us to a corner of America our stages rarely visit.  Sam feels great empathy for his characters, all lonely souls longing for a connection, and Davis McCallum’s sensitive direction deepens the humanity of this most humane play.  I am honored and happy to present this world premiere.”

The Few will also feature the voices of 17 San Diegans who auditioned to portray the lonely characters who place personal ads via answering machine for the play’s struggling newspaper.  The Old Globe held an open voiceover call for the public on July 21 to find authentic voices representing a variety of ages, genders and personalities.  From the over 100 community members from across San Diego County who auditioned, director Davis McCallum selected 17 of the most unique and compelling to work with him in a recording session.  Together, these voice recordings create a distinct and vibrant storytelling component that will be heard throughout the run of the production.

Playwright Samuel D. Hunter’s works include The Whale (2013 Drama Desk Award, 2013 Lucille Lortel Award for Outstanding Play, Drama League and Outer Critics Circle nominations for Best Play), A Bright New Boise (2011 Obie Award for Playwriting, 2011 Drama Desk nomination for Best Play) and his newest plays, The Few, A Great Wilderness and Rest, all set to premiere in the 2013-14 season.  His plays have been produced by Playwrights Horizons, South Coast Repertory, Victory Gardens Theater, Woolly Mammoth Theatre Company, Denver Center Theatre Company, Clubbed Thumb and Page 73 Productions.  His work has been developed at the O’Neill Center National Playwrights Conference, the Ojai Playwrights Conference, Seven Devils and elsewhere.  Hunter is the winner of a 2012 Whiting Writers’ Award, the 2013 Otis Guernsey New Voices Award, the 2011 Sky Cooper Prize, and the 2008-2009 PoNY Fellowship.  He is a member of New Dramatists, an Ensemble Playwright at Victory Gardens, a Core Member of The Playwrights’ Center, a member of Partial Comfort Productions and is currently a Resident Playwright at Arena Stage.

Gideon Glick (Matthew) has appeared on Broadway in the original companies of Julie Taymor’s Spider-Man: Turn Off the Dark and Spring Awakening.  Off Broadway he played Jack in Shakespeare in the Park’s production of Into the Woods and has appeared in Wild Animals You Should Know (MCC Theater), Speech & Debate(Roundabout Theatre Company) and Spring Awakening (Atlantic Theater Company).  His film credits include One Last Thing… and the upcoming films A Case of You, Gods Behaving Badly and Song One.  He can also be seen in two web series, It Could Be Worse and Wallflowers.

Eva Kaminsky (QZ) returns to the Globe after playing Margie Walsh last season in Good People.  She has worked on Broadway in The Lyons, Off Broadway in The Language Archive (Roundabout Theatre Company), Made in Poland (The Play Company) and ‘Nami (Partial Comfort Productions), and on the National Tour of The Syringa Tree.  Her regional credits include Mud Blue Sky (CENTERSTAGE), August: Osage County (Alley Theatre), God of Carnage (The Repertory Theatre of St. Louis), Breadcrumbs and Lidless (Contemporary American Theater Festival), The Syringa Tree (Long Wharf Theatre and A Contemporary Theatre), The Real Thing(Syracuse Stage), 1:23 (Cincinnati Playhouse in the Park), Speech & Debate (TheaterWorks), A Small Family Business (Cleveland Play House) and others.  Her film and television credits include Extremely Loud & Incredibly Close, The Adjustment Bureau and Just Like the Son, “Mercy,” “Ugly Betty,” “Gossip Girl,” “ER,” “Numb3rs,” “Royal Pains” and all the “Law & Order” series.

Michael Laurence (Bryan) has appeared on Broadway in Talk Radio and Desire Under the Elms.  His other theater credits include Opus and The Morini Strad (Primary Stages), Horsedreams (Rattlestick Playwrights Theater), Diary of a Teenage Girl (New Georges/3LD Art & Technology Center), Two Rooms (Platform Theatre Group),Lydie Breeze (New York Theatre Workshop), Tooth of Crime and Book of Days (Signature Theatre Company), The Crucible (Hartford Stage), Good People (Huntington Theatre Company), The Rainmaker (Arena Stage), Humpty Dumpty (McCarter Theatre Center) and others.  He is the playwright/performer of the solo play Krapp, 39(Soho Playhouse, Tristan Bates Theatre, Drama Desk Award nomination) and the upcoming duologue Hamlet in Bed.  His television and film credits include “Damages, “The Good Wife,” “Elementary,” “Person of Interest,” “Third Watch,” One for the Money, Man on a Ledge, A Walk in the Park, The Operator, Follow Me Outside, Room 314 and others.

Directed by Davis McCallum, The Few will run Sept. 28 to Oct. 27  in the Sheryl and Harvey White Theatre, part of the Globe’s Conrad Prebys Theatre Center.  Preview performances run Sept. 28 to Oct. 2.  Opening night is Oct. 3 at 8 p.m.  Tickets can be purchased online at www.TheOldGlobe.org, by phone at (619) 23-GLOBE or by visiting the Box Office at 1363 Old Globe Way in Balboa Park.