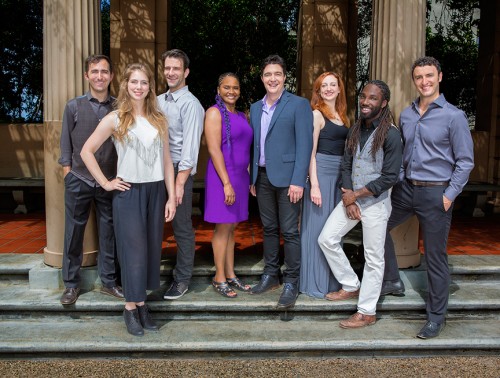 The cast of Globe for All 2015: (from left) Tyler Kent, Charlotte Bydwell, Patrick Zeller, Monique Gaffney, Christopher Salazar, Lindsay Brill, Jamal Douglas, and Lowell Byers. The 2015 production of The Old Globe’s touring program Globe for All, featuring Shakespeare’s Much Ado About Nothing, directed by Rob Melrose, begins its tour of community venues on Nov. 14 and runs through Nov. 22. Photo by Jim Cox.

This second year of Globe for All follows a highly successful inaugural production in 2014. One of the Bard’s most charming comedies, Much Ado About Nothing, will be directed by renowned Shakespearean Rob Melrose, Artistic Director of San Francisco’s Cutting Ball Theater, who makes his Globe debut. He directs a cast of local professional actors, including recent graduates of the Old Globe/University of San Diego Graduate Theatre Program.

The Shakespeare tour will begin November 10 and will culminate in four low-cost performances on November 21 and 22 in the Globe’s rehearsal halls, part of Balboa Park’s historic House of Charm.

Globe for All helps make theater matter to audiences who, for whatever reason, do not enjoy regular access to the professional performing arts. The tour visits locations as varied as military bases, recreation centers, libraries, centers for the elderly, homeless shelters, and correctional facilities. With production values scaled to non-theatrical venues such as gymnasiums, cafeterias, and multipurpose rooms, the tour gives audiences an intimate, up-close, and visceral experience of live performance and fosters a shared sense of community between performer and spectator. For some, the Globe for All tour is their first experience seeing a piece of live theater, and for others, it is an exciting return to the art form. In addition to providing the community with free access to professional performances of Shakespeare, Globe for All enriches the theatre experience by offering free workshops and other activities. Many of our community performances will feature a mask-making workshop at the venue one hour prior to the performance; these masks will be incorporated into the show, making audiences a part of the action.

Much Ado About Nothing is one of Shakespeare’s most popular and charming comedies. Soldiers return victorious from battle, their sights now set on the peacetime pleasures of love and merrymaking. But for Shakespeare’s wittiest couple, Beatrice and Benedick, romance is a “merry war” all its own, and their clever barbs protect their wary hearts.