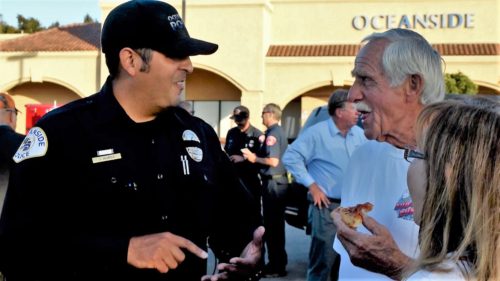 Organizers say the “Hug a Police” community event was an opportunity for north county residents to show their appreciation to police officers with a hug.

Oceanside resident Paul McQuigg organized the community celebration in 48 hours through social media and email. He says the event was held in response to the deadly shootings in Texas which claimed the lives of five Dallas police officers.

Organizers told residents to take photos with police officers, and spread the hashtag, #hugthepolice on social media. The goal is to create a national movement of support for police throughout the United States.

“This is an outreach from the Oceanside citizens to the Oceanside police department letting them know that we appreciate everything they do,” said Steve Hasty, the event’s DJ.

On Sunday, the Friends of Oceanside Parks will host “Honor Our Police Day” concert from 4 to 6 p.m. at Heritage Park, 220 Peyri Drive in Oceanside.