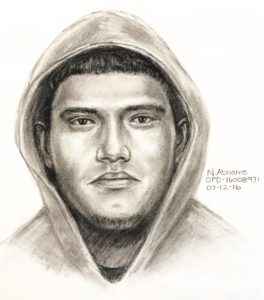 Oceanside police release a sketch of the suspect who attacked an 8-year-old Oceanside boy.

OCEANSIDE–Oceanside police detectives are searching for a man who physically assaulted an 8-year-old boy June 22 near his home.

Detectives say the 7:30 p.m. attack occurred when the boy was playing by himself directly behind his residence between the 4000 block of Olive Drive and the Sprinter tracks. He was approached by a light-skinned Hispanic male who appeared to be approximately 20-years old, according to police. The man talked with the victim for several minutes and without warning or provocation grabbed the boy around the neck. The man held the boy with such force that he could not breathe or yell. The man fled the area after the assault. The boy immediately contacted his parents.

Detectives believe the assault was an isolated incident, and the reason for the assault is unknown. The man was described as approximately five feet, seven inches tall with a heavy build and short hair. The man was possibility a transient who lived in a nearby field.

Anyone with information about the incident can contact Detective Stracke at (760) 435-4703.