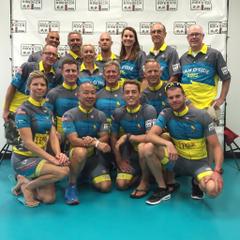 Team Oceanside at Race Across America.

OCEANSIDE–Five current and retired members of the Oceanside Police Department partnered with other City of Oceanside employees to comprise “Team Oceanside” for the 2015 Race Across America (RAAM).

The RAAM is considered by many to be the toughest cycling endurance race in the world. The race began at the Oceanside Pier on June 20 and continued, non-stop to the finish line in Annapolis, Maryland.  Team Oceanside completed the 3000 mile race in six days, six hours and twenty minutes, finishing in third place in the 8-person open category.

The vast majority of cyclists competing in the race do so to raise money for various charities.