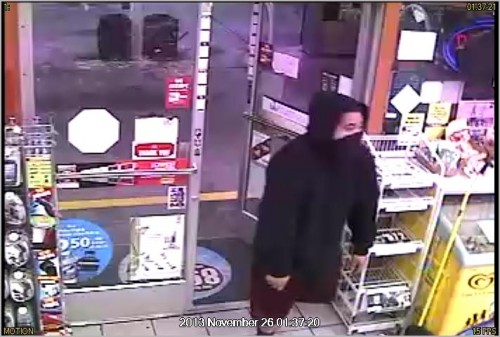 OCEANSIDE–Investigators and San Diego County Crime Stoppers are asking for assistance from the public to help identify and locate suspects wanted for a series of robberies in Oceanside.

On October 13, an armed robbery occurred at the Circle K store, 1990 College Boulevard in Oceanside. The suspect entered the store armed with a small silver revolver. He demanded cash and cigarettes from the lone clerk. The suspect had the lower half of his face covered with a shirt or bandana. He is believed to be a Samoan or Hispanic male, 20 to 25 years old, 5 feet, 8 inches to 5 feet 10 inches, with a heavy build.

According to Oceanside police there have been six similar robberies committed by the same suspect In each case the same suspect enters the store with half of his face covered and demands cash and cigarettes. He has been armed with gun, knife and screwdriver. Each case occurred in a convenience store in Oceanside between 11:30 p.m. to 1:40 a.m. A second suspect / accomplice entered the store with the primary suspect on December 4. He is described as a white or Hispanic male, 18 to 20 years old with a thin build.

Anyone with information regarding this robbery series should contact Oceanside police at (760) 435-4892. Or the Crime Stoppers anonymous tip line at (888) 580-8477. Crime Stoppers is offering up to a $1,000 reward to anyone with information that leads to an arrest in this case. Anonymous email and text messages can be sent via www.sdcrimestoppers.com.