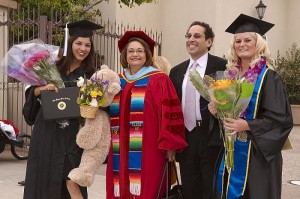 SAN DIEGO–Everyone who knows her knows that she is a Star Trek junkie. So it wasn’t out of character for Dr. Rita M. Cepeda, president of one of the largest community colleges in California and the nation, to open her 2010 commencement address talking about transformational forces in the universe.

“The ties that bind us are many, but the one thing we all share is the belief that education is one of the most powerful transformational forces in the universe,” Dr. Cepeda remarked to the 327 graduates of Mesa College who, along with their families and friends, filled the pavilion at the University of San Diego on Saturday, May 15.

“Today, more than other day, I know you are feeling deep within you the limitless power that comes along with knowledge and its quest,” she continued.

Graduates ranging in age from 18 to 69 participated in the ceremony that honored the largest graduating class in the San Diego Community College District. The Mesa College class of 2010 numbered 853 graduates who received 1,131 academic degrees and certificates.

Juan Sepúlveda, Executive Director of the White House Initiative on Educational Excellence for Hispanic Americans, was the commencement speaker.

In his address, Sepúlveda called the graduates “heroes” and told them that “our country needs you to keep moving forward with your education.” He asked them to do three things: 1) to get one more piece of paper, or degree; 2) to share their stories to inspire others to go to college; and 3) to “remain true to yourself and follow your passion.”

Sepúlveda’s comments were reinforced by Dr. Constance M. Carroll, Chancellor of the San Diego Community College District, who added, “By completing your education goals, you have not only forever changed and transformed your own lives, but the future of your families, and the overall good of your community.” Dr. Carroll also noted that the graduates were making an impact on the nation’s goal of increasing the number of college graduates in order for America to be more competitive in the world.

“We were honored to have a senior level White House administration official address our graduates, and we are delighted that person is Juan Sepúlveda.” said Dr. Cepeda.

Sepúlveda first visited Mesa College in August 2009, when he hosted a community forum on educational excellence for Hispanic Americans at the San Diego college campus.

Mesa College is known for its high transfer rate to four-year institutions, a fact that was reflected in the variety of degrees earned by the 2010 graduating class.