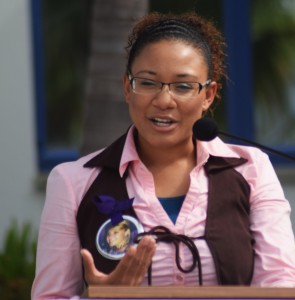 By Judith Cochran and Gina Yarbrough

OCEANSIDE–On October 17, the San Diego Violence Council and other related agencies and groups hosted the annual Domestic Violence HOPE event in front of the Civic Center Library in downtown Oceanside.

The purpose of the event was to raise awareness of domestic violence in San Diego County, the insidious relationship between drug addiction and intimate partner abuse, spread hope for greater prevention, and current and potential victims of the many resources available to them. A very important factor is the dangerous connection between drug addiction and domestic violence.

Domestic violence statistics nationwide indicate that it is a problem of epidemic proportions. According to an article posted by Alanna Vagianos on The Huffington Post website (10/23/14 and updated 2/13/15), three American women are murdered daily by their current or former male partner; a woman is beaten every 9 seconds, and 4,774,000 women experience physical violence by an intimate partner every year!

According to SANDAG, in 2014 there were 16,897 domestic violence incidents reported to law enforcement in San Diego County, an increase of two-percent from the previous year; and the cities of Escondido and Oceanside each had over 1,000 incidents reported in the same year. Findings from in-depth case reviews by the San Diego County Domestic Violence Fatality Review Team revealed that 34% of all the total offenders had a history of methamphetamine use and 25% had been using prior to the homicide. 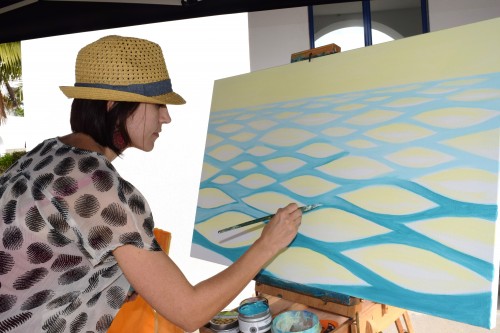 The well-attended three-hour event featured speakers who had either been victims of domestic violence or lived in households where it occurred on a continuous basis. Three women and one male shared their touching experiences of fear, hopelessness and physical, mental and emotional pain.

In a tribute to victims who tragically lost their lives at the hands of abusive partners, the program featured a presentation by Claudia Sinkule, whose 25-year-old daughter Nicole Sinkule was beaten to death with a hammer ten years ago by her boyfriend, a methamphetamine user. Sinkule said she fell to her knees when she first heard about the tragic, violent death of her beloved daughter. “Yesterday, October 16 was Nicole’s 10-year anniversary of passing,” said Sinkule, “and we just want to tell her story. Maybe it will help someone else.” Her advice to women in domestic violence situations is to make a Safety Plan. “Include an extra set of keys, sufficient money, and important papers, even if there is nothing going on at the time.” She also advised contacting support agencies such as the Women’s Resource Center in Oceanside and keeping the Domestic Violence Hotline number available. In an emotional yet eloquent closing, Sinkule said she was there to keep Nicole’s memory alive. “She didn’t deserve to die the way she did. By telling her story, we hope that life will go on for someone else. It also helps us to work through the devastation that domestic violence brought into our family.” 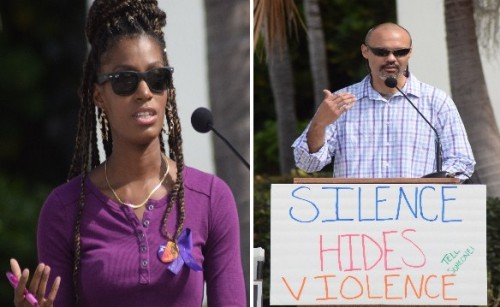 The other victims who shared their painful stories about living with and surviving this excruciating experience included Ty Smith of Encinitas who found a place to hide, heal, grow and transform through CRC (Community Resource Center) and a devoted therapist; Alyssa Phifer, now a competent, confident single parent and private violin instructor, was robbed of her self-esteem as a long-term victim of mental and emotional abuse that eventually landed her in jail while 5 months pregnant; and Escondido resident Kai Bright, a male survivor who spoke of the impact on his personal life and marriage as a result of living with a violent step-father who severely abused his mother.

“Most people use the term psychopath loosely. I know what it’s like to be actually stuck with one. He was very intelligent which made it all the more difficult to get away,” recalled Phifer.

Some of the organizations in attendance included the San Diego County Sheriff Department; Community Resource Center (CRC); Leap to Success; Hands Off USA; Family Advocacy; Women’s Resource Center and the North County Lifeline. Pamphlets, flyers and other forms of useful information were distributed.