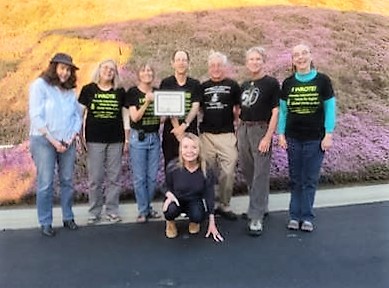 While none of the members could attend the conference in Florida to receive the award directly, they were presented the Write for Rights Letter Writing Award given to one group nationally for their outstanding work during Amnesty International’s Global Write-a-thon last December 2015.

Each year Amnesty selects 12 individuals, or groups from countries around the world whose human rights are being violated for their peaceful expression, or activities that have landed them in prison, tortured or threatened of harm. They become the focus in December of the Global Write-for Rights: “Write-a-thon”, a massive letter-writing campaign from Amnesty volunteers and supporters throughout the world who gather to write appeals to government officials on their behalf leading to significant results from the pressure. The event coincides with International Human Rights Day, December 10, the date in 1948 when the Universal Declaration of Human Rights was ratified by the nations of the world.

Last year was the second time the two local chapters joined forces to host their “Write-a-thon” at the high school’s theater in Vista. Attended by more than 240 letter-writers, the event was open to the public and included live African music, awards, refreshments and a keynote address from recently released Prisoner of Conscience Dieu Cay. Imprisoned for his blogs in Viet Nam, Dieu Cay credits Amnesty International letters with helping gain his release. The event then garnered 740 handwritten letters which were sent off and added to the 3.7 million appeals sent worldwide.