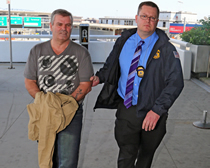 A Homeland Security Investigations special agent escorts Sulejman Mujagic May 31 at John F. Kennedy International Airport. Mujagic was turned over to Bosnia-Herzegovina authorities at the airport in New York for extradition. Photo courtesy of ICE.

WASHINGTON–Federal officials have extradited a Utica, N.Y., man to Bosnia-Herzegovina to stand trial there for charges relating to the torture and murder of one prisoner of war and the torture of another during the Bosnian War. The extradition is the result of an extensive investigation led by U.S. Immigration and Customs Enforcement’s (ICE) Homeland Security Investigations (HSI).

“For the families who lost loved ones during the Bosnian war, justice has been a long time coming, but they can take some comfort in knowing that those responsible for this tragedy are now being held accountable for their crimes,” said Ice Director John Morton. “I applaud the outstanding work by HSI special agents in upstate New York, ICE’s Human Rights Violators and War Crimes Center, and our partners at the Department of Justice and Bosnia and Herzegovina authorities. Thanks to their efforts, Sulejman Mujagic will now face justice for his actions. We will continue to work tirelessly to ensure our country does not serve as a safe haven for human rights violators and others who have committed heinous acts.”

“This extradition is the result of close cooperation between the U.S. and Bosnian authorities to bring alleged perpetrators of war crimes and torture in Bosnia to justice,” said Acting Assistant Attorney General Mythili Raman, of the Justice Department’s Criminal Division.

“Through the coordinated efforts of many law enforcement agencies and prosecutors, Sulejman Mujagic will stand trial in a Bosnian court for the alleged murder of an unarmed soldier and the torture of a second soldier,” said U.S. Attorney Richard Hartunian. “This case is a reflection of our steadfast commitment to support the rights of crime victims – wherever they are.”

Mujagic was extradited to Bosnia-Herzegovina to be tried for war crimes committed on or about March 6, 1995, during the armed conflict that followed the breakup of the former Yugoslavia. Bosnia-Herzegovina has alleged that Mujagic, then a platoon commander in the Army of the Autonomous Province of Western Bosnia, summarily tortured and executed a disarmed Bosnian Army soldier and tortured a second soldier after the two prisoners had been captured by Mujagic and his men.

Mujagic entered the United States in July 1997 and obtained status as a lawful permanent resident in March 2001. Mujagic does not retain U.S. citizenship.