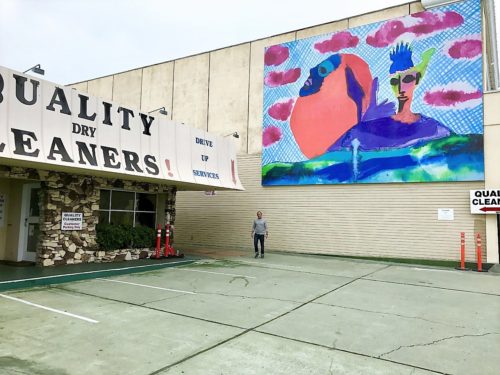 LA JOLLA–Steven Hull’s mural, Man, Myth & Magic, 2017, is part of a series of artworks inspired by circus imagery and its interaction with landscape.

In 1987, Hull visited the artist-made carnival exhibition Luna Luna Park curated by Andre Heller and has been intrigued by themes of the circus ever since. Man, Myth & Magic mixes bright, graphic color with whimsical notions as landscape is transformed into abstract figuration amidst checkered blue sky and pink clouds. Hard lines are aptly broken up by soft pools of bleeding watercolor. The viewer is transported into Hull’s visual fantasy that straddles between reference and abstraction into the mysterious world we associate with the carnival.

Hull is well known as a multi-media artist with an equally prolific curatorial practice. He creates immersive installations that combine his uniquely angular, colorful painting and drawing practice with complimentary sculpture and sound media in which all facets seek to inform one another. He has worked collaboratively with many artists, writers, and musicians to create original publications and albums, where artists of different media respond to one another through music, writing and visual works of art.

Hull received both his bachelor of fine arts and his master of fine arts from the California Institute of the Arts in Santa Clarita, California. He has exhibited both nationally and internationally and has organized many collaborative exhibitions and publications. He co-founded the artist run gallery and creative space Las Cienegas Projects. He lives and works in Los Angeles, California.

Murals of La Jolla was founded by the La Jolla Community Foundation and is now a project of the Athenaeum. The goal of the mural project is to enhance the civic character of the community by commissioning public art projects on private property throughout La Jolla. The Murals of La Jolla Art Advisory Committee is composed of the heads of the major visual arts organizations who commission artists to propose the intervention of an image on specific walls on privately owned buildings. The first two artworks, by Roy McMakin and Kim MacConnel, were painted directly on their sites. Subsequent artworks have been printed on vinyl and installed on billboard-like structures, with the exception of Heather Gwen Martin’s mural, which is painted on its site. Each work is on view for a minimum of two years and has been generously funded by private donations.

Murals of La Jolla, a project of the Athenaeum, demonstrates that commissioning artists to create works for public spaces brings energy and vitality to a community.

The Athenaeum Music and Arts Library, located in the heart of La Jolla, in San Diego County, is one of only 16 nonprofit membership libraries in the United States. This rare cultural institution offers a depth and accessibility of resources and programs found nowhere else in the region including one of the most significant collections of artists’ books in Southern California. The Athenaeum also presents a year-round schedule of art exhibitions, concerts (classical, jazz, acoustic and new music), lectures, studio art classes through its School of the Arts, tours and special events.