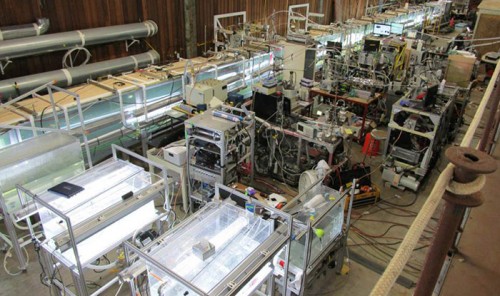 LA JOLLA–A factor that determines the properties of clouds that help moderate the planet’s temperature may be decided in the oceans.

The oceans are home to phytoplankton, which when they decay, produce molecules that become airborne – if bacteria don’t eat the molecules first.

A team of researchers led by scientists at UC San Diego found that the process by which marine bacteria consume phytoplankton has an apparent direct role in affecting cloud properties. As the bacteria feed, phytoplankton break down into component molecules such as fats and lipids. The molecules the bacteria leave unconsumed can become airborne as the ocean’s surface churns. Once in the atmosphere, these organic-enriched sea spray particles join dust and other particles, or aerosols, in becoming the framework for the drops of moisture that ultimately congeal into clouds.

This conclusion, reported in the journal ACS Central Science May 18, comes nearly one year after researchers created a replica ocean on the campus of Scripps Institution of Oceanography, UC San Diego, to observe in a controlled setting the types of marine particles that contribute to cloud formation and possibly human health issues once they become airborne. Because cloud cover and precipitation are major variables in climate, the field of aerosol research has achieved increasing prominence in recent decades. Understanding the dynamics of clouds is imperative for the creation of climate simulations that attempt to replicate atmospheric phenomena.

“It is exciting to finally be able to find a connection between microbes in seawater and atmospheric sea spray,” said Kimberly Prather, a distinguished chair in atmospheric chemistry with appointments at Scripps and the Department of Chemistry and Biochemistry at UC San Diego. “These chemical changes ultimately affect the reflectivity of marine clouds and thus could have profound impacts on climate over a large portion of the planet.”

The study draws data from the National Science Foundation-funded Investigation into Marine PArticle Chemistry and Transfer Science (IMPACTS) study conducted at Scripps’s Hydraulics Lab in summer 2014. Prather, who leads UC San Diego’s Center for Aerosol Impacts on Climate and the Environment (CAICE), and colleagues began with the observation that as plankton are broken down by bacteria, they can release many different insoluble fat-like compounds that later get aerosolized when waves break, producing sea spray. These chemicals include a vast array of molecules including proteins and their building blocks, as well as sugars and fats.

But understanding the factors that control the transfer of chemicals from the ocean to the atmosphere in sea spray has proven elusive. Some previous studies have reported that phytoplankton are the chief driver of the organic content of sea spray, but this has not been consistently observed in field studies.

In IMPACTS, the CAICE team sought to analyze sea spray in a controlled ocean-atmosphere environment to reveal which chemical components are transferred and when. The group recreated the ocean on a large experimental scale by importing 13,000 liters (3,400 gallons) of natural seawater from the California coast into a 33-meter-long tank that mechanically generates waves. Their results show that variations in the specific microbes in the bloom affected the concentrations of less water-soluble molecules such as lipids in seawater. In turn, bursting bubbles from the waves launched these molecules into the atmosphere.

Prather said the study has provided a new understanding of the importance of the complex interactions between microbes in seawater and how they control the composition and cloud-forming ability of sea spray aerosol. Such information will help researchers build better climate models. Among the cloud properties influenced by this microbial process is the clouds’ brightness. That brightness helps determine if solar energy is absorbed on Earth’s surface or reflected away from it, and thus influences temperature.

With the ability to generate sea spray aerosols in the laboratory during blooms, future studies will focus on developing a better understanding of the effects of biological compounds in sea spray on human health. Given that the biological compounds are inhaled by beachgoers and residents of coastal communities every day, their impacts could be substantial, but as of yet these effects are unclear.

Besides NSF, support for the study came from the Gordon and Betty Moore Foundation and the China Scholarship Council.