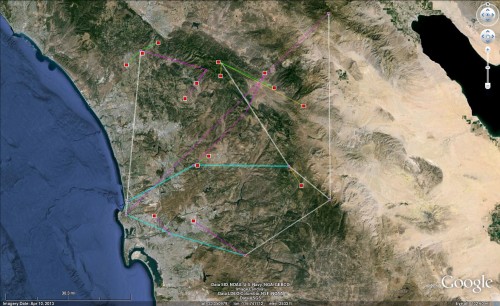 SAN DIEGO–Public and private officials gathered in San Diego Wednesday to announce the activation of a dramatically expanded Area Situational Awareness for Public Safety Network (ASAPnet), bringing high-speed, wireless digital communications and new emergency response capabilities to 60 backcountry fire stations as the region nears the peak of its fire season. The system uses as its backbone UC San Diego’s High Performance Wireless Research and Education Network, or HPWREN, a network that is best known for its series of 360 degree mountaintop high-definition cameras that operate 24 hours a day.

ASAPnet is being developed as part of a larger, multi-purpose and multi-agency enabling network infrastructure that features numerous sensors, including cameras, microweather stations and earthquake monitors, all growing more capable thanks to new and improved Internet applications.

The expanded network was announced at UC San Diego during a press conference hosted by Ramesh Rao, director of Calit2’s Qualcomm Institute and former chair of the National Research Council Committee on Using Information Technology to Enhance Disaster Management. The institute houses one of the world’s highest-resolution display systems, which was used to showcase live and archived video, audio, still images and data from ASAPnet.

The HPWREN backbone of ASAPnet is directed by Hans-Werner Braun, a research scientist at UC San Diego’s San Diego Supercomputer Center who, along with Frank Vernon, a seismologist with Scripps Institution of Oceanography, founded HPWREN in 2000.

Aware of the work being done on ASAPnet due to previous public safety partnerships with HPWREN, County Supervisor Ron Roberts in late 2011 brought officials with CAL FIRE and the San Diego County Fire Authority together with San Diego Gas & Electric (SDG&E) to talk about expanding an already cooperative effort. “The way these partners stepped up and committed technology and resources to help transform emergency response in our region is nothing short of amazing,” Roberts said.

“It took us 12 years to get to 15 stations linked to ASAPnet, but just a single additional year to get to 60,” says Braun, who personally conducted much of the field work, aligning mountaintop wireless antennas with those on remote fire stations, and working closely with multiple public safety agencies.

SDG&E was a key partner in the rapid development of ASAPnet.  The utility has a substantial, and growing, network of remote sensing equipment in the backcountry, from nearly 150 weather sensors, the nation’s largest and most advanced utility weather sensor network, to 29 solar-powered, high-definition video cameras along the Sunrise Powerlink route that automatically alert the utility to a perceived threat, such as smoke from the beginnings of a wildfire.

“What we are announcing today is a continuation of SDG&E’s commitment to public safety and the protection of vital sources of energy,” said Michael R. Niggli, SDG&E’s president and chief operating officer. “Whether by harnessing the latest technology to enhance real-time situational awareness, or making sure the largest helicopter in the business is on hand to douse flames, we’re pleased to be part of an outstanding level of cooperation to aid first responders and keep residents and communities safe this fire season.”

The majority of the fire stations that directly benefit from ASAPnet are under the command of Chief Thom Porter, CAL FIRE San Diego unit chief and the San Diego County Regional Fire Authority chief.

“Because of their remote locations, most backcountry fire stations have lacked broadband connections common at public safety operations and in many people’s homes,” said Chief Porter. “With ASAPnet operational, our crews can now take advantage of new capabilities, including rip-and-run printers already operating in 27 stations that quickly put information about emergencies such as vehicle accidents into responders’ hands.”

At build out next year, the network will cover point-to-point distances of up to 22 miles, connecting 70 fire stations, including some operated by the U.S. Forestry Service.

During his 2012 “State of the County Address,” Supervisor Roberts launched a major public safety technology initiative with his support of the Next Generation Incident Command System (NICS), which was followed by the release of a free, award-winning emergency app for smart phones/tablets and the Operational Downlink Informational Network infrared camera system for tracking fire lines through smoke. The build out of ASAPnet is an extension of that ongoing initiative.

“With these partnerships and technologies, we are improving public safety while providing greater tools and information to help safeguard the firefighters and emergency response personnel who we all depend on to confront and manage San Diego County’s inevitable wildfires,” said Roberts. “The model we are embracing, and the cooperation we are demonstrating, will serve as the model for 21st century disaster planning and response.”