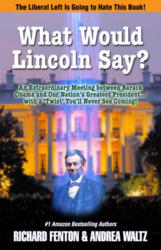 If he returned in 2012, what would Abraham Lincoln think about the current State of the Union he worked so hard to save? And if Lincoln did have a special message for Barack Obama, what would he say?

This is the premise of the new political fiction thriller, What Would Lincoln Say? by Richard Fenton and Andrea Waltz, which was officially released at the 2012 CPAC Conference in Washington D.C.

In fact, one late night, Abraham Lincoln does show up on the south lawn of the White House. He is immediately arrested and taken into secret service custody. Secret Service Agent Eric Landover has what should be his dream job, but life’s less than ideal. His father, a disgraced former agent himself spends all day alone and brooding, his mother is long passed away, his fiancé is pressuring him about their upcoming wedding, a career-making test looms, and now Eric finds himself taking the Abraham Lincoln lookalike to George Washington Hospital for observation.

What Eric doesn’t know is that Lincoln will draw him into an unimaginable situation culminating with the Lincoln and Obama meeting and a twist that no one will see coming!

While the book is obviously fictional, the authors say they wrote the book due to their very real concerns over the direction our nation is heading. “Our intent is to do more than simply entertain readers,” states Waltz.

“We want to get them thinking about where we’ve come over the last 150 years as a country, and if can survive the next 150.” Adds Fenton: “America is engage in a second Civil War — a war of ballots rather than bullets, perhaps, but a war nonetheless — with the fate of the nation hanging in the balance.”

As conservatives committed to ensuring that Barack Obama is a one-term president, Fenton and Waltz make no attempt to hide their disdain for the direction for our current political leaders. “We accept that the liberal left is going to hate the book,” says Fenton, with Waltz adding: “Our goal is to get people thinking about the impact our decisions and staggering national debt will have on future generations.”

They think that Abraham Lincoln would agree.