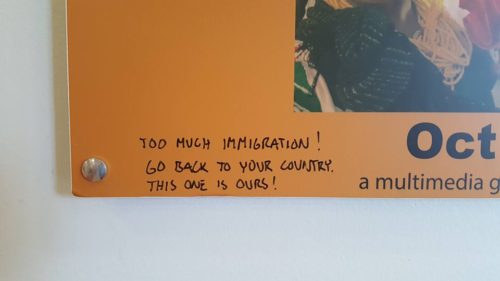 Museum staffers discovered the messages on exhibit signs which were written with a black marker pen.

Vandals wrote: “too much immigration! Go back to your country, This one is ours!” and “over population and crowding by immigration,”

Linda Caballero-Sotello, director of New Americans Museum, commented about the incident in a video post on Facebook.

“It’s very disheartening particularly on this weekend, Thanksgiving, which is our nation’s collection of values and traditions,” said Caballero-Sotello, in her video post.

She added, “We will not be discouraged, we’re certainly better than that as a nation, but at the same time it’s disheartening to see that a cultural space that talks about the contributions of immigrants can be so threatening to those that now feel empowered and emboldened to speak very negative and very divisive messages.”

The museum is a non profit organization that promotes the understanding and interaction between new immigrants and native-born Americans through art.