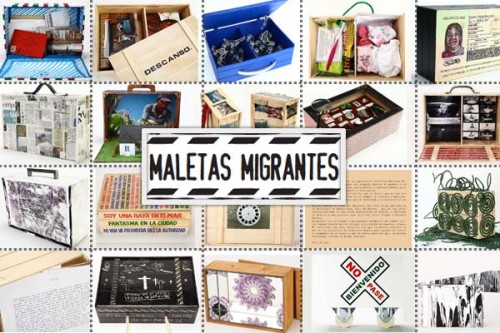 SAN DIEGO–The New Americans Museum will host a new exhibition of 50 suitcases made by 50 contemporary artists.

“Maletas Migrantes” was originally exhibited at the Memory and Tolerance Museum in Mexico City as a special undertaking in celebration of the Ford Foundation’s 50th anniversary in Latin America. It has traveled to El Salvador, Brussels and most recently to Tijuana, Baja California where it was exhibited at the Centro Cultural Tijuana (CECUT). It now crosses the border into the United States for the very first time to be exhibited at the New Americans Museum in San Diego.

“The exhibition proposes a space for visual exploration, which draws attention to the contradictions, belongings, negotiations and dialogues present in the geographic and emotional crossing of migrants,” said Ignacio Vazquez Paravano, exhibition curator. “The suitcase, as an allegorical figuration of displacement, transit, loss and the human ability to create and recreate itself, is the point of departure of this project. It is an intimate space in which the migrant takes memory and wishes; its past, present and future.”

In addition to “Maletas Migrantes,” the New Americans Museum will be exhibiting story “+LINES,” a multimedia installation that explores identity, migration and community. Conceived in 2012 as a community driven project in City Heights, by artist and AJA Project founder, Shinpei Takeda, this installation engaged residents as participants in the creative process and production of artworks that empower and speak true to their personal journeys; whether they span continents, state lines or city blocks.

Programming during these exhibitions will include museum talks, tours and film screenings. Join our mailing list to receive up to date information, calendars and invitations.

Admission to the exhibitions is free and open to the public. For museum hours, visit www.NewAmericansMuseum.org.