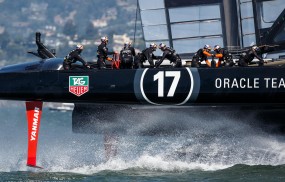 SAN FRANCISCO–A crowd of some 50,000 people flocked to the America’s Cup venues on the shores of San Francisco Bay to take in the 34th America’s Cup and were treated to heart-stopping action between defender Oracle Team USA and challenger Emirates Team New Zealand.

Only one race was held today, but tonight fans of the defender see a chance for a comeback after a 52-second victory in Race 8. Fans of the challenger are thankful their AC72 is still upright and in one piece, safely tucked back in the team base after a near capsize on the upwind leg.

“We got about as close as you can possibly get to having the thing end up on its side,” said Emirates Team New Zealand skipper Dean Barker, who was stuck in the leeward hull looking up at the rest of the 46-foot wide catamaran. “We still take a lot of positives out of today. We’re still very happy with the way the boat’s going and there are still things we can improve. We’ll be out there fighting for points tomorrow.”

Emirates Team New Zealand still leads on the scoreboard 6-0, and 6-2 in wins. The winner of the 34th America’s Cup will be the first team to win 9 points. For the Kiwis that means three additional race wins and for Oracle Team USA it means nine. But now that its second victory is in the books, Oracle Team USA has exonerated the penalty imposed by the International Jury and will start receiving points for race wins beginning with its next victory.

“It’s what the team needed. I can’t tell you how hard the team around us works,” said Oracle Team USA skipper Jimmy Spithill. “We’ve been saying it in house that we can win races. We don’t care what the scoreline is. At some point it’s going to turn. Today was a big moment for us. We clearly made a step in the boat’s performance. It’s a big step and a key moment in the regatta.”

Oracle Team USA spent yesterday in the boatshed making a series of minor modifications in the quest for more speed. The “mods” seemed to pay off when the defender took the action to Emirates Team New Zealand on the upwind leg of Race 8, a reversal of what had played out in the first four days of racing. Spithill wouldn’t say what changes were made to the team’s AC72, other than the forward bowsprit being removed, which saves a bit of weight.

Oracle Team USA won Race 8 after trailing off the start line and at the first two mark roundings, but its win was aided by Emirates Team New Zealand’s near capsize on the 3-nautical-mile upwind leg.

The crews had been engaged in a tacking duel and had traded four tacks. At the fifth meeting about three-quarters up the leg Emirates Team New Zealand attempted to tack to starboard and to leeward of Oracle Team USA. But the crew had a problem with the hydraulics and the wing didn’t “pop” onto the new tack.

With the wing inverted Emirates Team New Zealand’s starboard hull rose high in the air to the point where it was on the precipice of capsizing. The crew kept grinding away to restore hydraulic power and the wing was eventually straightened out. The starboard hull slammed back in the water, the boat upright. Had it gone over there’s no telling what damage could’ve occurred to the boat, crew or the team’s hopes of winning the America’s Cup.

“We were having a good tussle with the Oracle boys, getting near the top of the upwind,” said Barker. “It was sort of a marginal cross and we made the call to tack to leeward. We were a little bit rushed and we missed the hydraulics. If you don’t get the hydraulics and the boat tacks, the wind starts sucking the boat over. We got about as close as you can possibly get to having the thing end up on its side.”

After a break of some 30 minutes, the two crews lined up for the start of Race 9, and again Barker got the better of Spithill. The Kiwis came off the line ahead of Oracle Team USA, led by 4 seconds at the first mark and 7 seconds at the leeward gate. As the two crews began the upwind leg on opposite sides of the racecourse, the race committee abandoned the race because the windspeed exceeded the prescribed race limit of 22.6 knots.

Racing resumes tomorrow with Races 9 and 10, scheduled for 1:15 pm PT and 2:15 pm PT. In the U.S., the America’s Cup Finals will be broadcast live on the NBC Sports Network. Replays will be available on the America’s Cup YouTube channel.

Internationally, the America’s Cup Final can be viewed in more than 170 territories. All racing is also live on America’s Cup YouTube channel (subject to territorial restrictions).