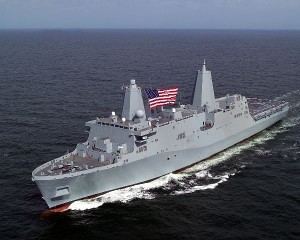 WASHINGTON–The Navy will christen the newest amphibious transport dock ship, San Diego, Saturday, June 12 during a 10 a.m. ceremony at Northrop Grumman Shipbuilding inPascagoula, Miss.  The ship is named for the city of San Diego, principal homeport of the Pacific fleet, and honors the people of “America’s Finest City” and its leaders for their continuous support of the military.

Gen. James Amos, assistant commandant of the Marine Corps, will deliver the ceremony’s principal address.  Linda Winter, wife of former Secretary of the Navy Donald Winter, is the sponsor, and in accordance with Navy tradition, will break a bottle of champagne across the bow to formally christen the ship.

Designated LPD 22, San Diego is the sixth amphibious transport dock ship in the San Antonio class.  As an element of future expeditionary strike groups, the ship will support the Marine Corps “mobility triad,” which consists of the landing craft air cushion vehicle, the Expeditionary Fighting Vehicle and the Osprey tilt-rotor aircraft.  San Diego will provide improved warfighting capabilities, including an advanced command-and-control suite, increased lift-capability in vehicle and cargo-carrying capacity and advanced ship-survivability features.  The ship is capable of embarking a landing force of up to 800 Marines.

Cmdr. Jon Haydel, of Houston, is the prospective commanding officer and will lead a crew of 360 officers and enlisted Navy personnel and three Marines.  The 24,900-ton San Diego is 684 feet in length, has an overall beam of 105 feet, and a navigational draft of 23 feet.  Four turbo-charged diesels power the ship to sustained speeds of 22 knots.