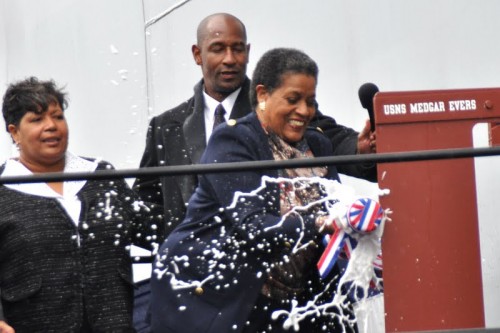 More than 1,000 watched as the ship’s sponsor, Myrlie Evers Williams, widow of the ship’s namesake, broke a bottle of champagne across the bow to formally christen the ship.

Designated T-AKE 13, Medgar Evers is the 13th of an expected class of 14 dry cargo/ammunition ships, all of which will be operated by the U.S. Navy’s Military Sealift Command (MSC).  Evers is being built by General Dynamics NASSCO shipyard. Eleven of the T-AKEs are slated to serve as Combat Logistics Force (CLF) ships, and threeare slated to become part of the Maritime Prepositioning Force. Combat Logistics Force ships help the Navy maintain a worldwide forward presence by delivering ammunition, food, fuel and other supplies to U.S. and allied ships at sea. Currently all 11T-AKEs operating today conduct CLF missions.

The first Navy ship named after Evers is the T-AKE 13. Aspart of MSC, T-AKE 13 is designated as a United States Naval Ship (USNS) and will be crewed by civil service mariners. For CLF missions, the T-AKEs’ crews include a small department of sailors.  Like the other dry cargo/ammunition ships, T-AKE 13 is designed to operate independently for extended periods at sea and can carry two helicopters and their crews.

The ship is 689 feet in length, has an overall beam of 106 feet and a navigational draft of 30 feet. Evers displaces approximately 42,000 tons and is capable of reaching a speed of 20 knots using a single-shaft, diesel-electric propulsion system.