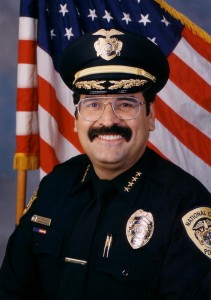 SAN DIEGO–National City Police Chief Adolfo Gonzales has accepted a position at the District Attorney’s Office as Chief of the District Attorney’s Bureau of Investigation. Gonzales brings more than 34 years of law enforcement and management experience to the DA’s Office, including eight years as National City’s Chief of Police and 26 years at the San Diego Police Department, three years of which he spent as Assistant Chief of Police.

“Adolfo Gonzales has a stellar reputation in local law enforcement and brings proven management skills to his new position leading our more than 100 sworn peace officers,” District Attorney Dumanis sad. “We’re very fortunate to have him join the District Attorney family and I know we will benefit greatly from his experience in the years to come.”

“I’m honored and proud to begin the next chapter of my career at such a prestigious and respected law enforcement organization,” Gonzales said. “Like District Attorney Bonnie Dumanis, I am passionate about public safety and I am pleased to continue my public service at the DA’s Office.”

Gonzales began his law enforcement career as a reserve police officer with the San Diego Police Department and consistently worked his way up the chain of command to detective, sergeant, lieutenant, commander, captain and eventually Assistant Chief of Police. While there, he was responsible for managing a large budget, more than 2,100 sworn officers and more than 600 civilian staff. He was in charge of the daily operations of three patrol divisions, several specialized investigative units, the Office of Neighborhood Policing and the Office of Policy Planning.

He left the San Diego Police Department to take on the Chief of Police position in National City in 2004. During that time, Gonzales has excelled in his role making community inroads, maintaining excellent relationships with staff and reducing crime by 25 percent over a four-year period.

Gonzales has been recognized with many honors and awards over the years including “Excellence in Public Service” from the UCSD, “Chief of Police of the Year” by the Neighborhood Market Association, a “Leadership Award” from the National Latino Police Chief’s Association and many other accolades. He is involved in numerous community and professional organizations; he speaks fluent Spanish and has earned a doctorate of education in leadership science from the University of San Diego.

Gonzales, who replaces retired Chief Paula Robinson, will begin his duties at the end of March.