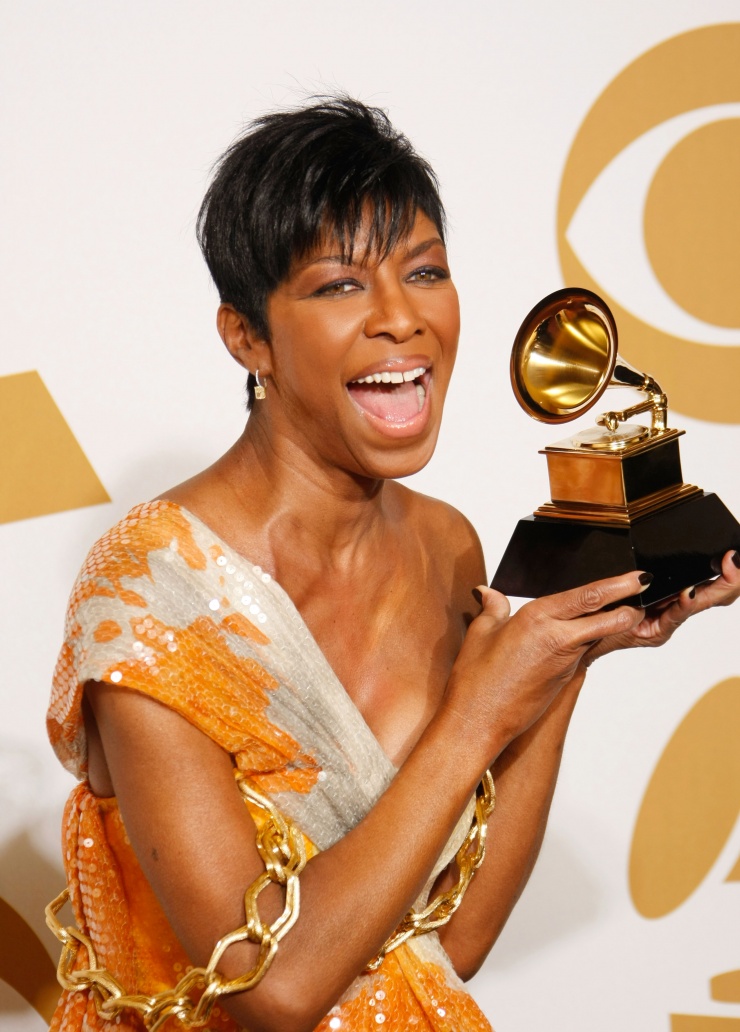 LOS ANGELES – When eight time Grammy Award winner Natalie Maria Cole is laid to rest on January 11, 2016, the pop/jazz music world owes an enormous amount of gratitude to this phenomenal artist who single handily revitalized and brought back to life, vitality and with her own unique sense of swing, the music of the 1950s.

Nat King Cole and his second wife, Maria Cole, had five children: Carole (“Cookie”), Natalie (nicknamed “Sweetie”), their only son, Kelly, and lastly, the twins, Casey and Timolin. Natalie was born in 1950 and made her recording debut in the company of her father and older sister when she was quite not four, on “Ain’t She Sweet” (which surprisingly-considering that it’s the only genuine non-doctored or spliced duet between Nat and Natalie – has never been reissued.

In the 1970s, Natalie Cole entered that elite group of second generation pop stars whose ranks also included Nancy Sinatra and Liza Minelli. She had considerable success in what was then known as dance music, although it is debatable to whether her hits of this era should be classified as R&B, soul, pop, disco or some combination of all the above. What matters is that in the earlier part of her career the younger Cole seemed determined to sing anything but her father’s music, and was a highly successful exponent of the youth pop style of her day, landing such hits as “This Will Be” (1975), “I’ve Got Love On My Mind” (1977), and “Our Love”(1978). Doubtless she would have gone on to become an even bigger star, but she spent most of the 1980s dealing with drug addiction and other problems that she relates in her highly readable memoir Angel on My Shoulder.

In 1988, she landed a further hit, a cover of Bruce Springsteen’s “Pink Cadillac.” However, earlier in the decade she had already taken a tentative step in the direction that would determine her later career. More or less as a lark, in the early 1980s she did a concert tour in conjunction with Johnny Mathis in which she paid tribute to her late father. To be honest most of us old-time Nat King Cole fans were dubious: Natalie had rejected her father’s music and only seemed to be turning to it as a last resort now that her career was at a low ebb. Still, by the time she recorded “When I Fall in Love,” a Victor Young standard associated with Nat (on her 1988 Everlasting), it was clear that a change of direction was in the wind.

In 1991, happily, we had occasion to change our tunes. That was the year she released Unforgettable, in which she took the final plunge and came up with a first-rate, fully realized tribute to her father’s music. Most of Nat’s classic albums – and those of Sinatra, Fitzgerald, etc. were recorded in no more than three days (they could have been done more quickly, were it not for union regulations). It took Natalie months and months to see Unforgettable through from concept to completion, and the process involved a battery of producers and arrangers. But even though it seemed as if the production exemplified everything that was excessive about the state of pop music creation in the last decade of the 20th Century – it probably cost as much to produce as everything her father ever recorded put together – the end easily justified the means. 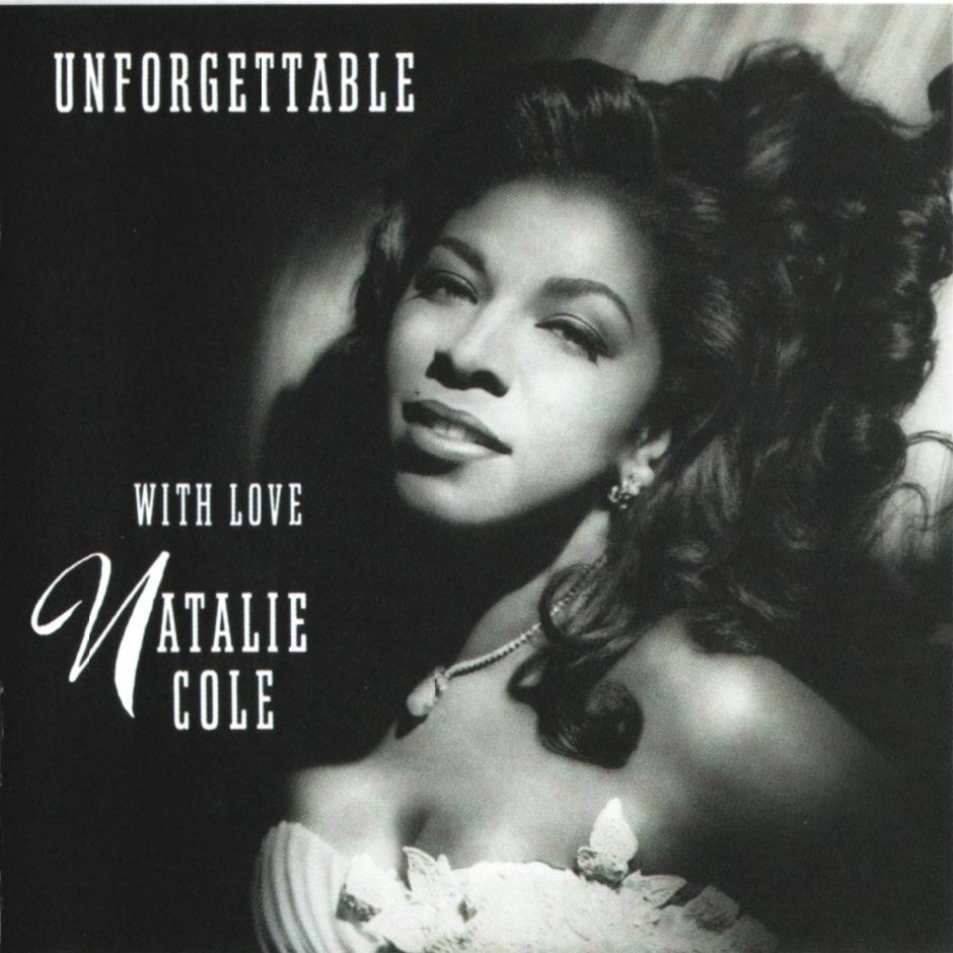 The Unforgettable (1991) album established Natalie Cole as the only pop star of her generation who sang the Great American Songbook. (Album cover courtesy of Elektra Records)

Unforgettable was a sensational pop album, in which Natalie Cole established herself at that time, the only star since Bobby Darin who could switch easily between youth and pop and classic and pop. What made Elektra Records very happy was that the title track, an electronically crafted duet between father and daughter, became one of the biggest-selling singles of the era. (Unlike most of the tracks on Frank Sinatra’s Duets, the record that Unforgettable inspired, the Nat-Natalie duet is still heard on all kinds of pop radio formats.) But if the title song was the bread-winner, the rest of the album was the real meat-and-potatoes, with the younger Cole singing generally swinging new treatments of songs associated with her father, arranged by such giants of modern jazz orchestration as Johnny Mandel, Ralph Burns, Marty Paich and Bill Holman.

With this record, Natalie Cole emerged as the only pop star of her generation who credibly sang the Great American Songbook, in a whole other class from Linda Ronstadt, Carly Simon, Harry Nilson, and all the others who had already tried and would try again. Natalie reinvented herself as a pop jazz chanteuse in the great tradition – if not on the level of Fitzgerald and Vaughan, at least worthy of mention in the same breath as Gloria Lynne or even Nancy Wilson. In contrast to those sultry sisters who came along after Natalie led by Diana Krall (who would share Natalie’s main producer, Tommy LiPuma), and Norah Jones, Cole had a sunny upbeat sound, with highly precise diction and reminiscent of both her father and her uncle, Freddy Cole, and a light tone more suggestive of the former than the latter.

That Natalie Cole will always be part of the contemporary pop world – even if she could sing her father’s music – is indicated by a line in her memoir in which she criticized her record company for releasing the follow-up album, Take a Look, only two years after Unforgettable. It was a far cry from the days when Nat Cole and his contemporaries would release at least three LPs a year. Perhaps because her albums, done in the piecemeal style of other contemporary pop projects, were so slow in production, Cole essentially made only a handful of noteworthy projects since Unforgettable, including Take a Look (1993) and Stardust (1996), and a very worthy Christmas project, Holly and Ivy (1994), done in the same swingingly retro style. In all her albums have sold well over 30 million copies worldwide.

In general, it seems that the greatest possible compliments you could pay Natalie Cole is if you happened to randomly tune in to one of these favorite four albums on the radio, you would in all likelihood assume you were listening to something actually recorded in the late 1950s.

The obvious tragedy of Natalie Cole is that she died so young (Nat King Cole died at the age of 45) – as much as she accomplished in her journey with us in this life, it’s no brainer that she would have achieved even greater success had she not felled in her prime at 65. A pre-eminent American singer who brought a classic sense of musical proportion and balance to everything she touched, Natalie Cole won the sobriquet as one of the most celebrated jazz/pop singers of her generation and earned the unqualified admiration of most of her peers. Musicians from Nancy Wilson, Johnny Mandel to Terri Lyne Carrington, when asked to name their all-time contemporary pop/jazz singer, cited Natalie Cole.

“In the late 1990s, no other artist other than Natalie Cole could have brought back the music of the Golden Era 1950s and she did it with such class, reverence and dignity,” music producer and arranger Johnny Mandel said upon hearing of Natalie’s death. Nancy Wilson hailed her as having “the best ear of any singer her generation has ever produced.”

Concord Records artist Terri Lyne Carrington summed it up best with her January 2, 2016 statement regarding the December 31, 2015 passing of this extraordinarily gifted musician: “It is with great sadness to hear of the passing of Natalie Cole. I met her when I was a teenager and later played with her on several occasions. She was always someone I admired and found inspiring because of her artistry and ability to cross genres-she was fluid in jazz, R&B, pop, rock and recently Brazilian music as well. Her voice was truly golden and one of a kind. It was a highlight of my career when she graciously agreed to sing Duke Ellington’s classic sacred song, “Come Sunday,” on my current CD, [The Mosaic Project: LOVE and SOUL]. I learned from this recording session that magic can still exist when someone is truly great. With Natalie, all you had to do is turn up the faders and her sparkle and brilliance took over, giving you a glimpse of heaven and serenity with each note. We will surely feel this void in the music world, but thank God we have so many incredible recordings to celebrate her artistry.”