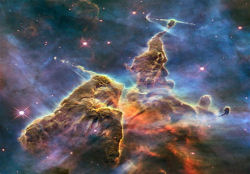 WASHINGTON–(USNewswire)–As the Hubble Space Telescope achieves the major milestone of two decades on orbit, NASA and the Space Telescope Science Institute, or STScI, in Baltimore are celebrating Hubble’s journey of exploration with a stunning new picture and several online educational activities. There are also opportunities for people to explore galaxies as armchair scientists and send personal greetings to Hubble for posterity.

NASA is releasing a new Hubble photo of a small portion of one of the largest known star-birth regions in the galaxy, the Carina Nebula. Three light-year-tall towers of cool hydrogen laced with dust rise from the wall of the nebula. The scene is reminiscent of Hubble’s classic “Pillars of Creation” photo from 1995, but even more striking.

NASA’s best-recognized, longest-lived and most prolific space observatory was launched April 24, 1990, aboard the space shuttle Discovery during the STS-31 mission. Hubble discoveries revolutionized nearly all areas of current astronomical research from planetary science to cosmology.

Over the years, Hubble has suffered broken equipment, a bleary-eyed primary mirror, and the cancellation of a planned shuttle servicing mission. But the ingenuity and dedication of Hubble scientists, engineers and NASA astronauts allowed the observatory to rebound and thrive. The telescope’s crisp vision continues to challenge scientists and the public with new discoveries and evocative images.

“Hubble is undoubtedly one of the most recognized and successful scientific projects in history,” said Ed Weiler, associate administrator for the Science Mission Directorate at NASA Headquarters in Washington. “Last year’s space shuttle servicing mission left the observatory operating at peak capacity, giving it a new beginning for scientific achievements that impact our society.”

To date, Hubble has observed more than 30,000 celestial targets and amassed more than a half-million pictures in its archive. The last astronaut servicing mission to Hubble in May 2009 made the telescope 100 times more powerful than when it was launched.