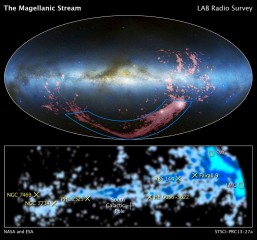 (Newswise) — Astronomers using NASA’s Hubble Space Telescope have solved a 40-year mystery on the origin of the Magellanic Stream, a long ribbon of gas stretching nearly halfway around our Milky Way galaxy.

The Large and Small Magellanic Clouds, two dwarf galaxies orbiting the Milky Way, are at the head of the gaseous stream. Since the stream’s discovery by radio telescopes in the early 1970s, astronomers have wondered whether the gas comes from one or both of the satellite galaxies. Now, new Hubble observations reveal that most of the gas was stripped from the Small Magellanic Cloud about 2 billion years ago, and a second region of the stream originated more recently from the Large Magellanic Cloud.

A team of astronomers, led by Andrew J. Fox of the Space Telescope Science Institute in Baltimore, Md., and the European Space Agency, determined the source of the gas filament by using Hubble’s Cosmic Origins Spectrograph (COS) to measure the amount of heavy elements, such as oxygen and sulfur, at six locations along the Magellanic Stream. COS observed faraway quasars whose emitted light passes through the stream and detected these elements from the way they absorb ultraviolet light. Quasars are the brilliant cores of active galaxies.

Fox’s team found a low amount of oxygen and sulfur along most of the stream, matching the levels in the Small Magellanic Cloud about 2 billion years ago, when the gaseous ribbon was thought to have been formed.

This discovery was a wrinkle Fox’s team didn’t expect, because computer models of the stream predicted that the gas came entirely out of the Small Magellanic Cloud, which has less gravity than its more massive cousin.

Astronomers have debated whether the two Magellanic Clouds are on their first pass near our Milky Way or are bound to it.

“What’s interesting is that all the other nearby satellite galaxies of the Milky Way have lost their gas,” Fox said. “The Magellanic Clouds have been able to retain their gas and are still forming stars because they’re more massive than the other satellites. However, as they’re now approaching the Milky Way, they’re feeling its gravity more and also encountering its halo of hot gas, which puts pressure on them. That process, together with the gravitational tug-of-war between the Magellanic Clouds, leads to the production of the stream. You’re seeing material stripped out of the Clouds as they come in toward the Milky Way.”

Ultimately, the gaseous stream may rain down onto the Milky Way’s disk, fueling the birth of new stars. This infusion of fresh gas is part of one process that triggers star formation in a galaxy. Astronomers want to know the origin of that wayward gas in order to more fully understand how galaxies make new stars.

“We want to understand how galaxies like the Milky Way strip the gas from small galaxies that fall into them and use that to form new stars,” Fox explained. “This seems like it’s an episodic process. It’s not a smooth process where a slow stream of gas comes in continuously. Instead, once in a while a large gas cloud falls in. We’ve got a way of testing that here, where two galaxies are coming in. We have shown which of them is producing the gas that ultimately will fall into the Milky Way.”

The team reported its results in two papers that appeared in the Aug. 1 issue of The Astrophysical Journal. Fox is the lead author of one paper; the other paper’s lead author is Philipp Richter of the University of Potsdam in Germany.