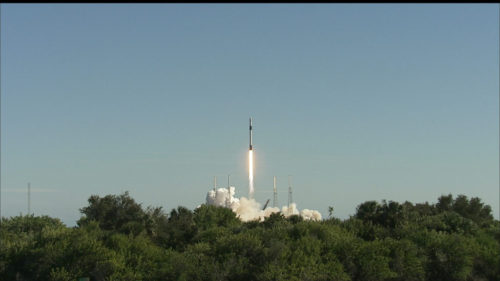 The company’s Dragon spacecraft lifted off at 1:16 p.m. EST on a Falcon 9 rocket from Space Launch Complex 40 at Cape Canaveral Air Force Station in Florida. It’s carrying more than 5,600 pounds of research equipment, cargo and supplies that will support the crew, station maintenance and dozens of the more than 250 investigations aboard the space station.

Live coverage of the rendezvous and capture will air on NASA Television and the agency’s website beginning at 4:30 a.m. on Dec. 8, with installation coverage set to begin at 7:30 a.m.

The Global Ecosystem Dynamics Investigation (GEDI) will provide high-quality laser ranging observations of the Earth’s forests and topography required to advance the understanding of important carbon and water cycling processes, biodiversity, and habitat. GEDI will be mounted on the Japanese Experiment Module’s Exposed Facility and provide the first high-resolution observations of forest vertical structure at a global scale. These observations will quantify the aboveground carbon stored in vegetation and changes that result from vegetation disturbance and recovery, the potential for forests to sequester carbon in the future, and habitat structure and its influence on habitat quality and biodiversity.

A small satellite deployment mechanism, called SlingShot, will be ride up in Dragon and then be installed in a Northrop Grumman Cygnus spacecraft prior to its departure from the space station. SlingShot can accommodate as many as 18 CubeSats of any format. After the Cygnus cargo ship departs from station, the spacecraft navigates to an altitude of 280 to 310 miles (an orbit higher than that of the space station) to deploy the satellites.

Robotic Refueling Mission-3 (RRM3) will demonstrate the first transfer and long-term storage of liquid methane, a cryogenic fluid, in microgravity. The ability to replenish and store cryogenic fluids, which can function as a fuel or coolant, will help enable long duration journeys to destinations, such as the Moon and Mars.

Growth of Large, Perfect Protein Crystals for Neutron Crystallography (Perfect Crystals) crystallizes an antioxidant protein found inside the human body to analyze its shape. This research may shed light on how the protein helps protect the human body from ionizing radiation and oxidants created as a byproduct of metabolism. For best results, analysis requires large crystals with minimal imperfections, which are more easily produced in the microgravity environment of the space station.

Dragon is scheduled to depart the station in January 2019 and return to Earth with more than 4,000 pounds of research, hardware and crew supplies.