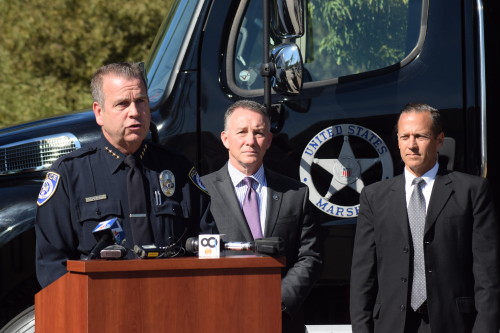 ESCONDIDO—State, regional and local law enforcement agencies united in North County to put an end to domestic violence, criminal activity, and to sweep the area of dangerous fugitives.

More than 100 suspects were targeted in “Operation Laura,” a two-day North County warrant sweep, that led to 47 warrants and 36 arrests of wanted fugitives.

The operation, led by U.S. Marshals, was named in honor of deceased Escondido Police Officer Laura Perez who was murdered by her husband during a domestic violence incident last year.

“They came together in honor of my officer who was killed, and I think that the results sends a positive message for Laura’s family,” said Escondido Police Chief Craig Carter. “This was a team effort.”

Chief Carter praised his department, and the work of U.S. Marshals, Carlsbad Police Department, and San Diego County Sheriff’s Department for keeping the community safe from fugitives, and other dangerous criminals.

Operation Laura involved more than 110 officers from multiple local, state, and federal agencies during the Tuesday and Wednesday operation this week. The San Diego Sheriff’s Department coordinated all radio communications for the operation.

As a result, officers closed a number of felony and misdemeanor warrants, opened five new drug cases, arrested one individual for possessing stolen property, and made one referral to Adult Protective Services.

The goal of the operation was to disrupt criminal activity by arresting known fugitives from justice, and to increase the safety of the neighborhoods and small communities where these individuals were hiding.