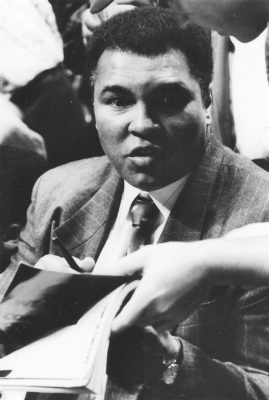 Ali, who died on June 3, 2016, at the age of 74, was a devout Muslim. Gunnell said that a Jenazah, a traditional Muslim funeral service, was held at Freedom Hall, Louisville, KY on Thursday, June 9. It was open to all. The family chose the venue both because it seats 18,000 and because it holds historical significance for the hometown hero. Ali fought, and won, his first professional fight there in 1960. Gunnell said Ali, who converted to the Islamic faith in the 1960s, started planning his own funeral nearly a decade ago. Gunnell said he wanted his services “to reflect his life and how he lived” with a heart open to people of all colors and creeds.

PURE skill was much of it some would say about Ali’s fighting abilities. The brutal delicacy of the ring-craft, so rare in the heavyweight division. Among the lumbering sloggers he dodged and danced, floating like a butterfly, stinging like a bee. Faced with a solid, flat-footed opponent, as all seemed to be compared with him, he would circle, torment and mesmerise, throwing short punches at speed. All that weaving, skipping, leaning leisurely away, before coming in for the kill. Flooring Sonny Liston once with a punch so fast that no one quite saw it (see above). Taunting George Foreman to exhaustion by sinking into the slack ropes, just letting him punch himself out while his own fine, hard body absorbed the blows. He always knew when his rivals would topple. He would mimic their shuffling desperation and his own artistry, pummelling the air with fast, precise, furious fists. Let the old guard complain that he ducked and dipped too much, held his hands too low and his chin cocked too high; he won fights.

And what fights. Fifty-six of them in his career, and only five defeats. One against Liston in 1964, when he was 22 and the odds were 7-1 against him, that left the world heavyweight champion too beat up after six rounds to come out of his corner. One against Cleveland Williams that was watched by the biggest indoor crowd yet seen in boxing, 35,460 people. The Rumble in the Jungle in Kinshasa in 1974, at which 60,000 Congolese cried “Ali, boumayé! Ali, kill him!” The Thrilla in Manila against Joe Frazier the next year, fought in 100-degree heat, to retain his title when he was 33 years old. Boxing had never been so entertaining or so global. In the whole bruised and bloody history of the sport, there had never been such a star!