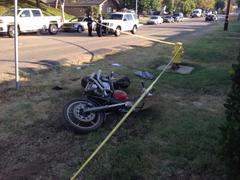 Motorcycle lies on the road after a vehicle collision on Friday. Photo: Escondido Police Department

ESCONDIDO–A motorcyclist was seriously injured Friday after a van struck his bike near an entrance to a mobile home park, Escondido police said Friday.

Officers say the driver of the red Honda Shadow motorcycle, 59 year-old Escondido resident Steven Ray Smiley, was driving south on Hale Avenue approaching the entrance to the mobile home park. The driver of the grey Honda Odyssey van, 35 year-old Escondido resident Rolando Baza Ramos, was driving north and began to turn left into the driveway. Ramos failed to yield to the motorcycle and drove directly into its path, causing the collision.

The van had stopped in the driveway of 1301 S. Hale Ave. with front-end damage. They also found the motorcycle lying on the ground off of the roadway, with the driver having sustained serious injuries. Escondido Fire medics transported the motorcyclist to Palomar Hospital where he was treated for his injuries.

Though it is believed the driver of the motorcycle may have been under the influence of alcohol, it is not believed to be a contributing factor to the cause of the collision; toxicology results and charges will be pending. The driver of the van was not intoxicated. Both drivers possess valid driver’s licenses.

The traffic investigation is ongoing.