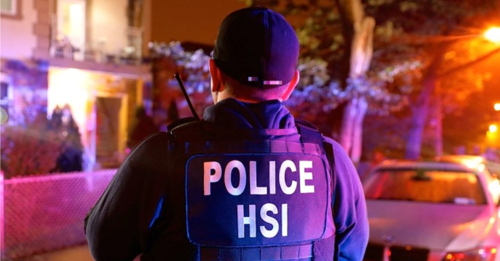 The investigation, being prosecuted out of New York City’s Special Narcotics Prosecutor’s Office, uncovered a large-scale alleged cocaine and heroin distribution network centered  in the East Village and a related gambling operation located in a busy commercial district near West 11th Street and Avenue of the Americas in the West Village.

The individuals were arrested in New York City, Massachusetts, Georgia and Florida. An indictment filed by the Office of the Special Narcotics Prosecutor for the City of New York follows a long-term wiretap investigation by Homeland Security Investigations and NYPD’s Narcotics Borough Manhattan South, Gang Squad Manhattan South and Vice Squad.

“Those arrested today are not just alleged to have been involved in selling highly addictive drugs on city streets, but they are also connected with a sophisticated underground gambling operation right here in Manhattan,” said Angel Melendez, Special Agent in Charge of Homeland Security Investigations New York. “Law enforcement always seeks to build on their investigations, consistently seeking to connect the dots. As we continue to work jointly in these operations, HSI and NYPD are able to combine intel and resources to takedown  criminal networks like this one.”

“The illegal behavior outlined in today’s indictment will never be tolerated in New York City by the NYPD or any of our law enforcement partners,” Police Commissioner James O’Neill said. I commend the attorneys and the investigators at the Office of Special Narcotics Prosecutor and Homeland Security Investigations, along with our Narcotics, Gang and Vice detectives, for demonstrating time and again that we are patient, and that our collaborative forces have a long reach.”

The investigation began with cocaine and heroin trafficking and ultimately led police to a sophisticated illegal gambling operation that catered to a clientele of New York City professionals. The indictment identifies David Diaz as the head of both the narcotics distribution network and the gambling operation, which included the Poker House located at 446 Avenue of the Americas and an online gambling business. DIAZ allegedly ran these interconnected narcotics and gambling operations with assistance from two top associates. Defendant Benjamin Guerrero, maintained an alleged drug stash apartment in a residence occupied by family members at 536 East 5th Street in the East Village and oversaw the packaging and sales of narcotics. Guerrero also served as a “pit boss” for the West Village Poker House. Defendant Geeta Singh, aka “Mira,” served as a manager and promoter for the gambling operation.

At the outset of the investigation in November of 2017, defendants Anthony Delea and Lewis Castro, both alleged members of the Diaz narcotics operation, made multiple narcotics sales to an undercover NYPD officer. On more than one occasion, members of an NYPD surveillance team observed Delea and Castro exit 446 Avenue of the Americas in possession of narcotics prior to making a sale to an undercover. Only later did narcotics investigators learn the address housed a gambling operation.

A clear picture of two interrelated narcotics and gambling schemes emerged once the Office of the Special Narcotics Prosecutor and the NYPD initiated a four-month wiretap investigation with assistance from HSI New York and the Manhattan District Attorney’s Office. The wiretap investigation initially focused on Castro and expanded to include Guerrero, Diaz and alleged narcotics suppliers Dante Rodriguez, Moliek Hudson and Edward Aigbojie.

Diaz and Guerrero allegedly received drug deliveries Rodriguez, who resides in Yonkers, N.Y., Hudson, who is based Deltona, Fla., and Aigbojie, who resides in Brooklyn. AIGBOJIE allegedly served as a middleman for Hudson and was also an avid gambler at the Poker House.

While the narcotics-related investigation was underway, an NYPD undercover officer with the VICE Squad successfully penetrated the West Village gambling house and participated in poker games with the regular clientele. As a result of the combined efforts of the undercover operation and the wiretap investigation, police were able to identify the hierarchy and methods of the gambling operation.

As charged in the indictment, Diaz allegedly oversaw the entirety of the gambling operation, while Guerrero serving as “pit boss” on multiple nights per week. Guerrero’s brother, defendant Alberto Guerrero allegedly held accounts associated with the Poker House in his name and received income from the gambling operation. Alberto Guerrero, who resides in Amherst, Mass., and Diaz are charged with money laundering in the second degree.

The Poker House operated from 4 p.m. to 4 a.m. and consisted of two floors that accommodated approximately 30 players at a time. Players at lower stakes tables on the first floor were required to purchase a minimum of $200 in chips, while higher stakes players upstairs were required to purchase $500 in chips. Each game lasted two hours, enabling tens of thousands of dollars to change hands in a single night. Players who left before the two hours were up forfeited their chips. Proceeds of the illegal gambling operation were used to fund further narcotics trafficking.

The entrée for Poker House clients was through defendant Geeta Singh, aka “Mira,” who managed and promoted the gambling operation remotely from her residence in Atlanta, Ga. and oversaw a related online poker business. Among the methods Singh allegedly used to draw high stakes clientele were event listings through the online service Meetup. Clientele for the poker games were thoroughly vetted and were required to show a text message from Singh in order to gain entrance to the Poker House.