MARINE CORPS AIR STATION MIRAMAR–Hundreds of Sailors, Marines, and their families braved the summer’s high temperatures to interact and get signed autographs of their favorite San Diego Chargers player at a practice session at Marine Corps Air Station Miramar.

Friday’s visit at the military base was part of the Chargers’ 27th annual Salute to the Military which will continue at Saturday’s preseason game against the Seattle Seahawks at Qualcomm Stadium in San Diego.

Prior to the practice session, Charger players and the Charger Girls  taught youths from the Boys and Girls football and cheerleading drills on the field. 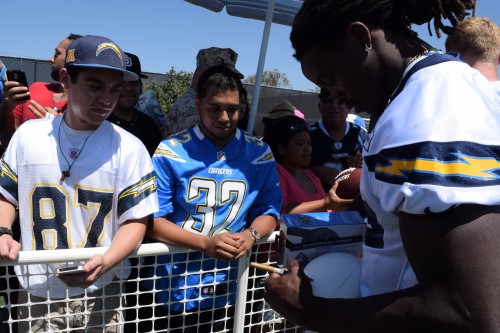 “It’s a blessing being able to meet these guys in person. It’s awesome,” said San Diego resident Magnum Mauga, who waited near a fence for autographs from the players. “We’ve been a San Diego Chargers fan for a long time. We are looking forward to the season.” 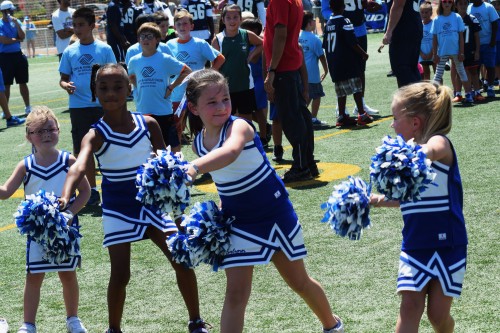 “I think it’s very amazing what the Chargers are doing as an organization to come out to support, not only the community but the military that are here. I’m very excited that they are out here getting autographs and spending the time to be out here with us,” Camacho said.

Since 2005, the Bolts have held practice sessions at Miramar Air Station. It’s an opportunity for the Chargers organization to give back to the military.

“It’s a lot of fun. I haven’t been able to get out much in San Diego just commuting from the hotel to the stadium. It’s always fun to get out here especially to this environment, and to the community to interact with all the fans here. It’s awesome,” said Chargers Outside Linebacker Ryan Mueller, while signing autographs for fans.