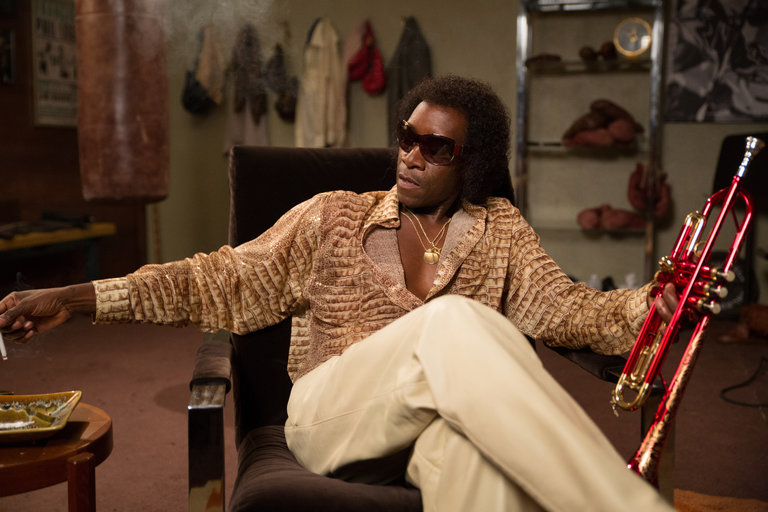 LOS ANGELES – Miles Dewey Davis III, better known as Miles Davis, was not only the most important jazz trumpeters of all time, he was one of the giants of the 20th century music scene. In the recently released Sony Pictures Classics movie, Miles Ahead, its director, co-writer and co-producer Don Cheadle delivers a compelling and powerful performance in the role of the late jazz trumpeter Miles Davis — the raspy voice, the death stare, the hair, the attitude, the cocaine-fueled paranoia – he nails it.

I could not help but reflect on the comparisons and contrast Cheadle portrayed in the film which eerily reminded me of the 1986 Clint Eastwood film, Round Midnight, in which we had the great sax man, Dexter Gordon playing a jazz saxophonist named Dale Turner, a hopeless alcoholic performing in Paris who unwillingly befriends a young Parisian fan. The young Parisian senses Turner’s vulnerabilities and invites him home for food and drink. That seemingly very slight gesture, a fan trying to help the man he admires, was the heart of Round Midnight.

Flash forward to Miles Ahead where Cheadle drops us right down into the middle of Davis’ life, during the late 1970’s when he took five years of self-imposed retirement and lived like a hermit. Cheadle gives us a moment to speculate which comprises the entire plot of the film: The speculation that Dave Brill (Ewan McGregor), a fictional freelancer from Rolling Stone, charged in on Davis’ home and demanded an interview? And what if, in the process of the questioning, Davis turned Brill into a temporary associate? You know, a dude who can sneak Davis into a college dorm to score cocaine, protect him during a shootout on the streets of Manhattan (he limps from a degenerative hip condition), and help Davis steal back master tapes from Harper Hamilton (Michael Stuhlbarg), a honcho at Columbia Records. As Davis tells Brill, “If you’re gonna tell a story, man, come with some attitude,” which is one of my favorite lines from the film.

The writers employ an additional device to explore Davis’ past, albeit in a superficial fashion, introducing the meta-fictional character of Junior (Lakeith Lee Stanfield, from Short Term 12), a brilliant young jazz trumpeter handled by Harper. The producer’s plan is that Davis will do for this emerging artist what he did for John Coltrane. But it quickly becomes clear that Junior is actually a representation of Davis as a promising star.

This yields some lively sequences of controlled chaos, as reality and fantasy blur while Junior becomes an accomplice in the plot by Davis and Braden to steal back the session tapes. The resulting violence brazenly introduces a more dramatic origin to the hip disorder that caused Davis’ permanent limp. Even if Cheadle the director is less assured with the high-stakes car chases and gun violence, they reinforce the picture’s invigoratingly jazzy contempt for chronological, just-the-facts storytelling. 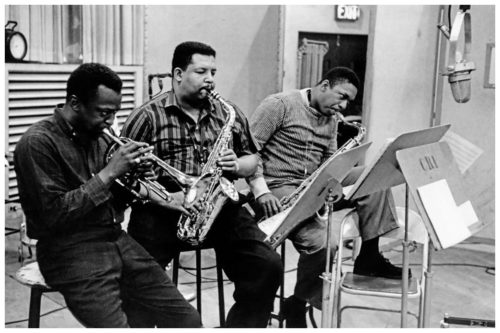 Miles Davis – The Central Figure of the Modern Jazz Age

Miles Davis was the central figure of the modern jazz era in the 1950s-1960s, and one of the most interesting personalities in jazz, a musician whose career is filled with paradox. The history of jazz is freighted with high talents who failed to make the most of their vast natural abilities. Bix Beiderbecke, Joe Thomas, Bud Powell are just a few who were equipped by nature to do much more than they did. In Miles, we have the reverse, a much rarer case: a man who possessed only a relatively modest natural gift, but who by dint of intelligence and force of personality made himself one of the major figures in jazz.

Davis did not have the instinct for melodic lines that Beiderbecke and Charley Parker had, the flawless rhythmic sense of Lester Young, or the feeling for drama on which Louis Armstrong built his greatest solos. He was, furthermore, a limited instrumentalist with a poor high register and a tendency to crack more notes than a professional trumpet player should. And yet, with the exception of John Coltrane, since the death of Charlie Parker no jazz musician has been more influential than Miles Davis.

Davis developed a distinctive cool toned sound, stripping the bebop vocabulary to its essentials and making every note and silence count. On ballads (where he often utilized a Harmon mute and played close to the microphone), his playing was often exquisite. 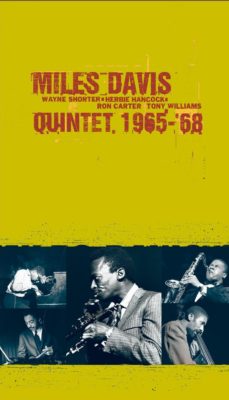 In 1954, Miles Davis got his life together after kicking his heroin addiction. He recorded a classic version of “Walkin” that showed listeners that he had moved away from cool jazz into harder swinging, introduced the songs “Four” and “Solar,” and in December 1954 had a memorable recorded session with Theolonius Monk and Milt Jackson. The following year, Davis really broke through. At the 1955 Newport Jazz Festival he played in peak form (including forming “Round Midnight” with Monk) before an important group of critics, who finally realized that he was a giant. Before the year was out, Davis was leading his first “classic quintet,” a group with the unknown tenor saxophonist John Coltrane, pianist Red Garland, bassist Paul Chambers, and drummer Philly Joe Jones. Miles was 29 and had finally arrived!

During 1955-56, the Miles Davis Quintet recorded four fine straight-forwarded albums for Prestige Records (remarkably sounding similar to how they performed in clubs) and a gem (Round About Midnight) for Columbia; Davis signed with the latter company, where he would remain into the 1980s. His voice by then had become quiet and raspy (due to his getting into a verbal argument when he should have been resting in preparation for throat surgery), and his angry persona (he occasionally played with his back to the audience) and was looked upon as a measure of Black pride, since he did not feel compelled to compromise himself in the white dominated world. The fact that he treated more women rather poorly, had a violent temper, and loved to cuss up a storm (often to shock white fans) was often overlooked.

By 1957 the first quintet had broken up, due partly to Coltrane and Philly Joe Jones’ drug use; Coltrane kicked his heroin addiction later in the year. Davis led a few short-term bands and recorded the first of his full-length collaborations with Gil Evans, the brilliant masterpiece Miles Ahead, from which the title of the movie is derived.

The Metamorphosis of Miles Davis

During 1965-68, Davis’ band developed a freer style of jazz that was quite original. With Wayne Shorter’s alto sax compositions, Tony Williams’ drumming, Herbie Hancock on piano, bassist Ron Carter, and Davis’ constant musical curiosity led the band into many uncharted areas, sometimes seemingly to suspend both time and chords, although they continued to hang onto both if just barely at times.

In 1968, Davis persuaded Hancock to start using electric keyboards, Shorter began doubling on soprano, and the influence of both modern R&B and rock started to be felt, in small waves at first. By the following year, the second quintet was no more, as the rhythm section gradually became keyboardist to Chick Corea, electric bassist Dave Holland, and drummer Jack DeJohnette. Getting away from jazz forms, Davis began to record lengthy rockish jam sessions in the studios. The atmospheric “In A Silent Way” and particularly the double LP “Bitches Brew” signaled the beginning of the fusion era, mixing rock and funk rhythms with jazz improvisations.

Rhythmic vamps became the basic of many of Davis’ pieces and around 1971 he began distorting the sound of his horn with electronics. It would not be until the late 1990s that other jazz musicians would start to fully explore Davis’ ideas of this era; he was so far ahead of his time!

One of the neatest things Cheadle did at the very end of the Miles Ahead film –rather than build toward the neat conclusion of an emergence from isolation from 1975-1980, the movie motions with economy toward Davis’ return to creativity, with Junior acting as his guide. Closing screen text lists Davis’ timeline as May 26, 1926 -, omitting the date of his death in 1991.

The suggestion that his influence will endure forever is reflected also in a closing fantasy concert, during which Cheadle’s Davis shares a stage with collaborators like Herbie Hancock and Wayne Shorter as well as contemporary performers including Esperanza Spaulding and Gary Clark, Jr. As an ending it feels dramatically soft, but as a generation-spanning salute it’s playful, respectful and uplifting.