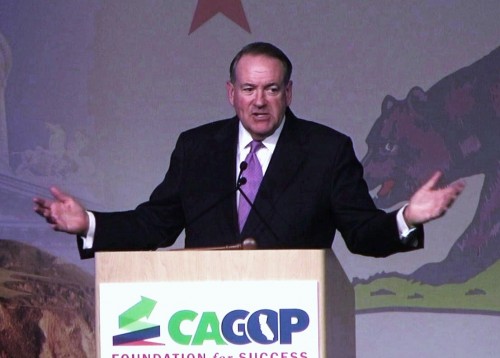 ANAHEIM, CA – Presidential candidate Mike Huckabee said the future of a healthy, thriving America depends on a population “willing to adhere to a moral code” — and the country is drifting away from that.

Speaking at the Friday luncheon of California Republican Party’s weekend convention at the Anaheim Marriott, Huckabee said the country’s constitutional government is based on self-governance — but that lying, stealing and cheating is undermining that foundation.

“Quite frankly, we have so much government because as the moral code of our population begins to break down, we demand that there be more government,” he said. “More cops on the streets, more counselors dealing with people with addictions. We demand more people regulate the industries so that they don’t cheat us if we’re in the same industry.

“The best government that we will ever have is the self-government of a moral code internally that tells us that it is better to be right than to be wrong.”

Talking with reporters before the luncheon, Huckabee addressed an incident at a Donald Trump rally Thursday, where someone asking a question of the billionaire candidate said President Barack Obama was Muslim and “not even American.”

While video of the Trump incident makes it appear that Trump clearly heard what the man said, Huckabee said that it’s sometimes difficult to make out exactly what people are saying at rallies. But Huckabee said he would have corrected the questioner.

“If I’d of understood what the person said, I would have said look, ‘There’s no evidence whatsoever that Barack Obama is anything other than what he professes to be, which is a Christian. I take him at his word for that,” Huckabee said.

Huckabee has been in fifth or sixth place in most national polls for the GOP nomination, a status he brushed aside Friday. He pointed out that at this point in the 2008 Republican race, he had polling numbers similar to those currently while the frontrunners were Rudy Giuliani and Fred Thompson. Both Giuliani and Thompson would drop precipitously in the polls, while John McCain won the nomination with Huckabee in second place.

“Historically, whoever is the summer blockbuster never wins the Oscar in the spring,” he quipped to reporters.