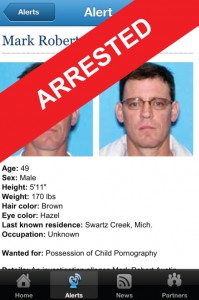 DETROIT–Less than 36 hours after U.S. Immigration and Customs Enforcement’s (ICE) Homeland Security Investigations (HSI) rolled out a new Operation Predator smartphone app to solicit information from the public about wanted child predators, a Michigan man profiled in the app was arrested.

Mark Robert Austin was arrested Friday afternoon without incident by HSI and FBI special agents along with officers from the Michigan State Police in the Flint, Mich., area after numerous tips from the public were called in to the ICE tip line. Following the national and regional publicity generated by the app’s announcement, several members of the public called in tips indicating known areas Austin frequented.

The criminal complaint and arrest warrant for Austin was signed April 30 in U.S. District Court for the Eastern District of Michigan and unsealed Aug. 2. At that time, HSI had little information about his exact whereabouts, but he was believed to be living in southeastern Michigan. Austin was charged with allegedly downloading more than 100 images and nearly a dozen videos of child pornography.

He is currently being held on state charges of distribution of marijuana. Additional details about the arrest are being withheld pending his initial appearance in federal court to answer to the child pornography charges.

“One of the primary goals of this app was to make the world a very small place for suspected child predators to hide,” said William Hayes, acting special agent in charge of HSI Detroit. “The arrest of Mr. Austin certainly proves that goal was accomplished.”

This investigation is part of Operation Predator, a nationwide HSI initiative to protect children from sexual predators, including those who travel overseas for sex with minors, Internet child pornographers, criminal alien sex offenders and child sex traffickers. HSI encourages the public to report suspected child predators and any suspicious activity through its toll-free hotline at 1-866-347-2423 or by completing its online tip form. Both are staffed around the clock by investigators.

Suspected child sexual exploitation or missing children may be reported to the National Center for Missing & Exploited Children, an Operation Predator partner, via its toll-free 24-hour hotline, 1-800-843-5678.

HSI is a founding member and current chair of the Virtual Global Taskforce, an international alliance of law enforcement agencies and private industry sector partners working together to prevent and deter online child sexual abuse.