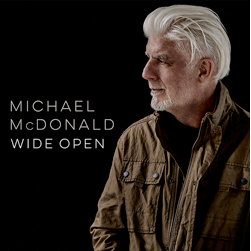 Wide Open, Michael McDonald’s first new album in nearly a decade, is out this month through BMG.

Featuring special guests including Warren Haynes, Robben Ford, Marcus Miller and Branford Marsalis, the record is available on iTunes and Amazon. Fans can following  McDonald on Spotify and Apple Music.

McDonald recently celebrated the release of Wide Open with a performance for PBS’ “Soundstage,” scheduled to air this fall. He also kicks off the second leg of his U.S. tour, including dates at Nashville’s Ryman Auditorium, ACL Live in Austin and the closing set at the Treftles Stage at the Kaaboo Festival. See below for a complete list of tour dates.

Wide Open follows a trio of albums of R&B and soul covers McDonald recorded for the fabled Motown label, the most recent being 2008’s Soul Speak. Wide Open is McDonald’s first album of original material in 17 years, comprised largely of material written over a number of years in-between projects and recorded in his Nashville studio with drummer Shannon Forrest (Faith Hill, Blake Shelton, Tim McGraw, Toto) and an extensive cast of Nashville session musicians.

McDonald also recently collaborated with bassist Thundercat and Kenny Loggins on the hit single “Show You The Way” which the trio performed on “The Tonight Show Starring Jimmy Fallon.” McDonald joined Thunrdercat during a surprise guest appearance at this year’s Coachella, as well; the Los Angeles Times hailed McDonald’s surprise appearance as one of the “10 best performances” at the festival, praising “McDonald’s silky keys over Thundercat’s undulating bass,” while The Guardian called it “a perfect moment in a set that contained slick highs” and Billboard noted, “Who thought that in 2017 65-year old Doobie Brothers singer Michael McDonald would bring down the house at Coachella?”

In addition to his work with Thundercat, McDonald was also recently joined by Solange Knowles, Allen Stone, Lawrence and members of Snarky Puppy and Vulfpeck during his set at the Okeechobee Music Fest.