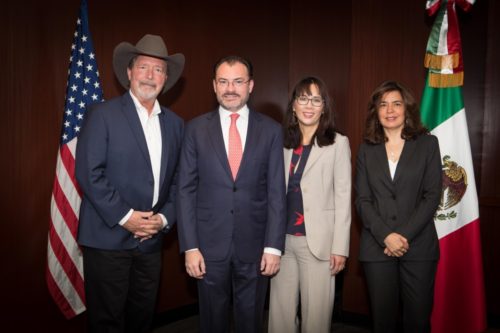 Secretary Videgaray’s visit is historic for SANDAG and its 19 member agencies, reinforcing the strong connections that transcend borders in our binational region.

“The San Diego region is unique because of its many diverse geographical characteristics. Just as important is our shared border with Mexico,” said Poway Mayor Steve Vaus, Vice Chair of the SANDAG Board of Directors. “We know that our two countries share a common geographic space, but we also share our economies, which is why collaborative milestones like Secretary Videgaray’s visit today are so significant.”

Secretary Videgaray’s visit underscores the importance of SANDAG’s partnership with the Mexican Government on border projects, such as State Route 11 and the future Otay Mesa East Port of Entry, which is a project that SANDAG is working on in partnership with Caltrans and counterpart organizations in Mexico. These efforts represent the continued partnership of the two countries and address pertinent issues that affect both the United States and Mexico.

In a statement, Secretary Videgaray highlighted the importance of binational work on priority border infrastructure projects such as the Otay Mesa East Port of Entry project.

“During the past decades, both countries have transitioned from a largely independent approach toward bilaterally managing the border in order to foster development and economic growth,” Videgaray said.

Secretary Videgaray has worked in Mexico’s public sector for more than 25 years in various roles. His previous role was Mexico’s Secretary of Finance.