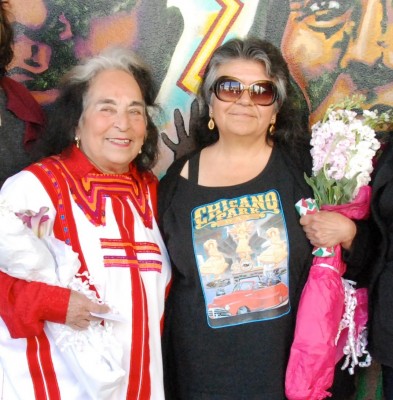 The special event, which kicks off at at 5:30 p.m., will be filled friendship, the sounds of mariachi, Mexican antojitos, a silent auction, and brief comments from individuals whose lives have been touched by the passion, teachings, philanthropy and activism of Gracia Molina de Pick, who is expected to attend.

Proceeds from the event will support the design, fabrication and installation of gallery signage, a plaque, and a biographic narrative for the Gracia Molina de Pick Glass Gallery at Mesa College. The six-panel glass gallery, located in the outdoor rotunda of the Humanities, Languages and Multicultural Studies Building, will feature a series of displays.

The first rotating exhibit, dedicated to Molina de Pick’s legacy, will debut at the glass gallery in spring 2014. It will feature the history and contributions made to Mesa College as a faculty member in the 1960s and ‘70s, and include historical civil rights events and moments throughout San Diego history.

For more than 60 years, Gracia Molina Enriquez de Pick has been an educator, feminist, mentor of students and community activist for women’s equality, indigenous communities, labor and immigrants’ rights. As an early champion for bi-lingual education, Molina de Pick helped to develop an academic program at Mesa College that gave birth to one of the first Chicano Studies Department in the nation.

Last March, de Pick gifted $80,000 to Mesa College for the creation of an endowment supporting the Mesa College Chicana/o Studies Department — which she helped to found in 1970. It is believed to be the largest of its kind awarded to support a Chicana/o Studies program at a community college.  The Gracia Molina de Pick/Chicana and Chicano Studies Department Endowment Fund also supports an annual student scholarship and a lecture series that honors her legacy.“We welcome everyone — and especially those whose lives have been personally touched by the passion and teachings of Gracia Molina de Pick — to join us,” said organizer, Chicano Studies Department Chair, Professor Cesar Lopez.

For information on tax-deductible sponsorship opportunities, call (619) 388-2759. Ticket purchases can be made online at atributetogracia.eventbrite.com.