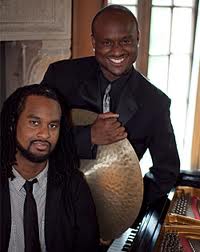 From left, Noble and Nathan Jolley.

WASHINGTON – Nathan and Noble Jolley grew up in a musically gifted family in Washington, DC where music dominated their home and their community. Washington, DC has been home to many jazz pioneers, perhaps none better known than Duke Ellington, but also singer Shirley Horn, pianist Billy Taylor, and saxophonist Frank Wess. Another noted DC native who made a impact in tradional and comtemporay jazz, was Nathan and Noble’s late father and great jazz guitarist, Noble Levi Jolley, Sr.

It is no surprise that drummer Nathan and pianist Noble dedicated their debut Memoirs Between Brothers 10 tracks CD in memory of their late father. Noble Levi Jolley, Sr. was a superb guitarist, composer, music educator, as well as an apostolic minister. He was a graduate of Roosevelt High School in Washington, DC and the jazz studies program at Howard University, Washington, DC. Noble, Sr. studied guitar with the incomparable Bill Harris, and won the Kenny Burrell Guitar Competition. He also played banjo, mandolin, sitar and piano. He performed both with his sons and other musicians in the DC area. He composed a number of works on religious themes, and also wrote for television and the stage; and he directed the jazz band of the Duke Ellington School of the Arts in the 1980s, and taught guitar, music theory and music appreciation in colleges, schools, and pre-schools in the Washington area. When Noble, Sr. died in 2003, his survivors included his wife, Denise Bossard Jolley, three daughters, Rashida, Vivian and Christina; twin sons, Noble Jr. and Nathan; and twin stepsons he adopted, Vincent and Victor Hopkins; a brother, and nine grandchildren.

As you can see, the Jolley family has a long and distinguish history of producing and performing music in DC and the world for that matter. These young cats couldn’t help but be influence to great music with a father like that! Now you can get into the groove of what makes Memoirs Between Brothers such an interesting and important piece of work.

Nathan is not only a professional jazz drummer; he is a percussionist, composer, songwriter, arranger, and producer. When you listen to the tracks on this CD, you’ll be able to hear him articulate his highly energetic and flamboyant style of drumming. Noble, a jazz pianist, composer, producer and arranger, began his instrumental training on the harmonica at the age of three before moving on to the accordion, viola and trumpet. He regularly performs with the Noble Jolley Group and his sister, R&B harpist/singer Rashida Jolley. He also plays, composes and produces Gospel and R&B music.

When Noble plays the piano on various tracks of this CD, he plays with a good deal of dazzling technique which is quite stunning for a young pianist of his stature.

Noble’s piano playing technique is a work of art constantly being improvised as he goes along. Get into the groove of this young cat’s music and you can hear him employ arpeggios and long runs of various sorts dashing at high speed up and down the keyboard that dominates his playing.

The inextricable relationship between African music and possession states, like pentatonic scales and shifts in timbre, has been carried over in jazz; and Memoirs Between Brothers embraces that relationship magnificently!

Jazz family, take the Groove Man’s word for it — you owe it to yourself to get this CD for your collection. Nathan and Noble, and the rest of the Jolley clan for that matter, are doing a marvelous job in keeping their father’s legacy alive. And for this – all you old cats can rest assure that the future of jazz is looking good.

Danny “The Groove Man” Johnson is an entertainment news journalist based in Washington, DC