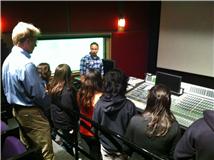 Oceanside High School music students and their instructor, Mark Phelps, were eager to get a behind the scenes look at the state-of-the-art MediaTech Oceanside studios. Courtesy photo.

OCEANSIDE–It’s a multimedia world. More and more products and jobs are being created to deliver digital content and most of it has sound and picture. Whether it is a video link emailed to you at your place of employment detailing your health benefits, or a blockbuster Hollywood movie, a crew of professionals has to produce, shoot, sound supervise, record, edit, and distribute it.  There is a consistent growing demand for those with the multimedia skills to create this content, and we will offer training for all of it,” states Tracy Terrell, Vice President MediaTech Oceanside.

On  June 27, MediaTech Oceanside studios will begin offering one-year comprehensive programs in digital film and recording arts for those with a dream of working in the entertainment industry. The Digital Film & Video Arts program encompasses all aspects of production from script to screen such as camera operation, directing, producing, lighting, gripping, editing, visual effects, budgeting and distribution.  The Recording Arts program consists of Audio Engineering & Studio Techniques, Mixing Mastering & Post Production, Producing & Songwriting, Live Sound Reinforcement, and Business of Music courses. An open house is scheduled for May 26, 2011 from 7 pm to 9 pm, and students may begin enrolling for the first class scheduled for June 27.

According to the Employment Development Department of California, by 2018 there will be over 14,330 jobs seeking experts in arts, design, entertainment and media communications just in California alone. The organization also projects employment for music directors, singers, video producers, directors, AV technicians, advertising directors and more.

“The best paying jobs are not going to those that just know computers, audio recording, or graphic arts; it’s those technicians that have a good grasp of all media. Today it’s almost impossible to create most audio, video, and print media without having both creative and technical skills. No longer is someone’s job title just an artist or just a technician; their job has really become what I like to call a “MediaT–ech,” states Russell Whitaker founder and President.

Russell Whitaker is a 30-year veteran in the entertainment industry. He has worked with such legends as Buddy Miles, Leon Russell, ZZ Top, Phil Collins and on films such as Leave It to Beaver, Baywatch, Titanic, Miami Vice to name only a few of hundreds of projects. In September, he opened Southern California’s newest multimedia production facility, MediaTech Oceanside, with the intent of bringing Hollywood level facilities, production and talent to the area. The multi-studio facility is capable of handling any type of audio, video or film production and is located just a stone’s throw from the beach in beautiful Oceanside. These brand new studios feature the latest technology and equipment from Apple, Digidesign, Solid State Logic, JBL, and other major manufacturers, which is accessible to all students.

The studios are located at 302 Oceanside Blvd. in Oceanside.

For a tour or more information on the open house call (760) 231-5368 or go to www.mediatech.edu. MediaTech Institute also has locations in Houston, Austin, and Dallas, Texas.